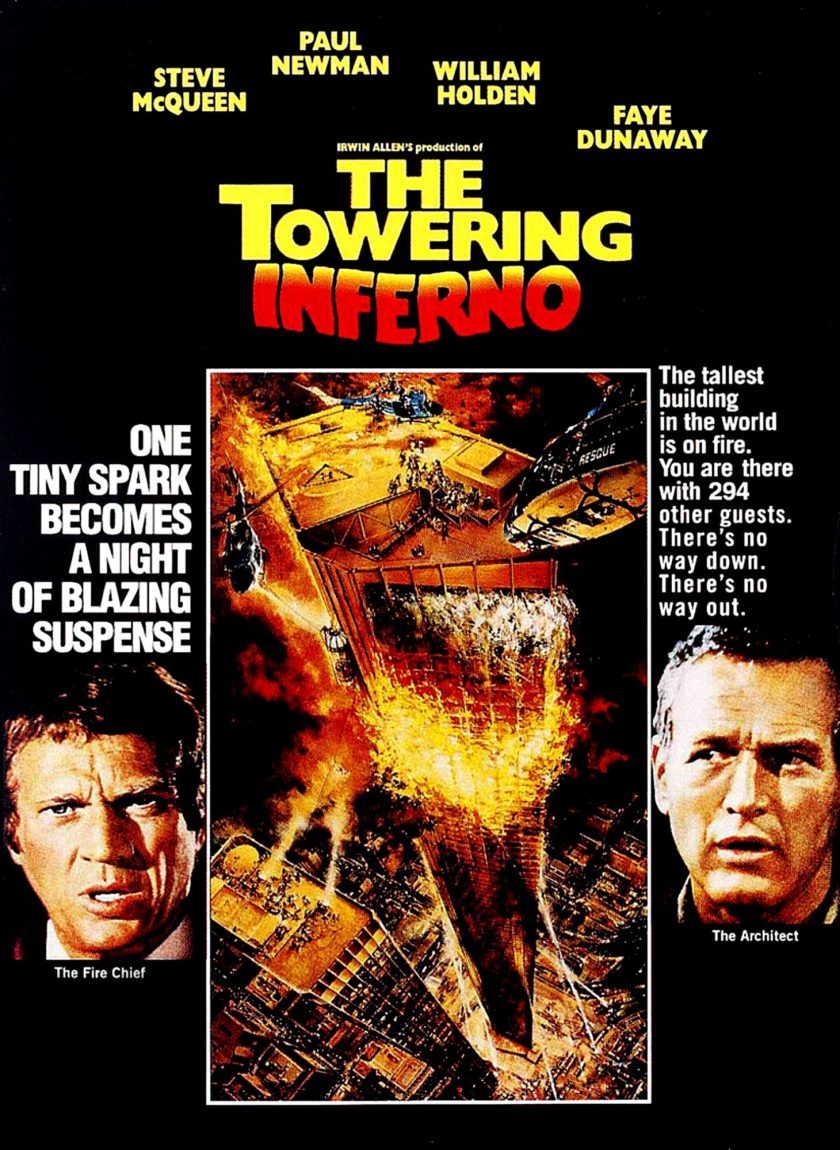 Forty-seven years ago today, the film The Towering Inferno premiered and went on to be the highest-grossing film of the 1974. I love 70s disaster movies, they are always so very stylish, have great soundtracks, and are jam-packed with famous faces. This is one of the best, you should watch it.

Architect Doug Roberts (Paul Newman) returns to San Francisco for the dedication of the Glass Tower, which he designed for developer James Duncan (William Holden). The tower, 1,688 feet (515 m) tall and 138 stories, is the world’s tallest building. During testing, an electrical short starts an undetected fire on the 81st floor just after another such short occurs in the main utility room. Upon learning this Roberts sees the wiring is inadequate and suspects that Roger Simmons (Richard Chamberlain), the electrical subcontractor and Duncan’s son-in-law, cut corners. Roberts confronts Simmons, who feigns innocence.

During the dedication ceremony, chief of Public Relations Dan Bigelow (Robert Wagner) turns on all the tower’s lights, but Roberts orders them shut off to reduce the load on the electrical system. Smoke is seen on the 81st floor, and the San Francisco Fire Department is summoned. Roberts and engineer Will Giddings (Norman Burton) go to the 81st floor, where Giddings is fatally burned pushing a guard away from the fire. Roberts reports the fire to Duncan, who is courting Senator Gary Parker (Robert Vaughn) for an urban renewal contract and refuses to order an evacuation.

SFFD Chief Michael O’Halloran (Steve McQueen) arrives and forces Duncan to evacuate the guests from the Promenade Room on the 135th floor. Simmons admits to Duncan that he cut corners to bring the project back under budget and suggests other subcontractors did likewise. Fire overtakes the express elevators, killing a group whose elevator stops on the engulfed 81st floor. Bigelow and his mistress Lorrie (Susan Flannery) are killed when a separate fire traps them in the Duncan Enterprises offices on the 65th floor. Lisolette Mueller (Jennifer Jones), a guest being wooed by con man Harlee Claiborne (Fred Astaire), rushes to the 87th floor to check on a deaf mother and her two children. Security Chief Jernigan (O. J. Simpson) rescues the mother, but a ruptured gas line explodes and prevents Doug and the rest of the group from following. The explosion destroys the emergency stairs which they must traverse to reach an exit door leading to a service elevator which can take them to the 134th floor, below the Promenade Room. They await firemen sent to blow up hardened cement blocking access to it.

As firemen begin to bring the fire under control on floor 65, the electrical system fails, deactivating the passenger elevators; O’Halloran must rappel down the elevator shaft to safety.

An attempt at a helicopter rescue fails when two women run up to it, causing the pilot to try to evade them, crashing and setting the roof ablaze. A Navy rescue team attach a breeches buoy between the Promenade Room and the roof of the adjacent 102 story Peerless Building, and rescue a number of guests, including Patty Simmons (Susan Blakely), Duncan’s daughter. Roberts rigs a gravity brake on the scenic elevator, allowing one trip down for twelve people, including Roberts’ fiancée Susan Franklin (Faye Dunaway), Lisolette and the children saved earlier by her and Robert’s efforts in the stairwell. An explosion near the 110th floor throws Lisolette from the elevator to her death and leaves the elevator hanging by a single cable, but O’Halloran rescues the elevator with a Navy helicopter.

As fire reaches the Promenade Room, a group of men led by Simmons attempts to commandeer the breeches buoy which is subsequently destroyed in an explosion, killing Simmons, Senator Parker and several other men. In a last-ditch strategy, O’Halloran and Roberts blow up water tanks atop the Tower with plastic explosives. Most of the remaining party-goers appear to survive as water rushes through the ruined building, extinguishing the flames, though it is clear that many are not so lucky.

Harlee Claiborne, in shock upon hearing of Lisolette’s death, is given her cat by Jernigan. Duncan consoles his grieving daughter and promises that such a tragic disaster will never happen again. Roberts accepts O’Halloran’s offer of guidance on how to build a fire-safe skyscraper. O’Halloran drives away, exhausted.