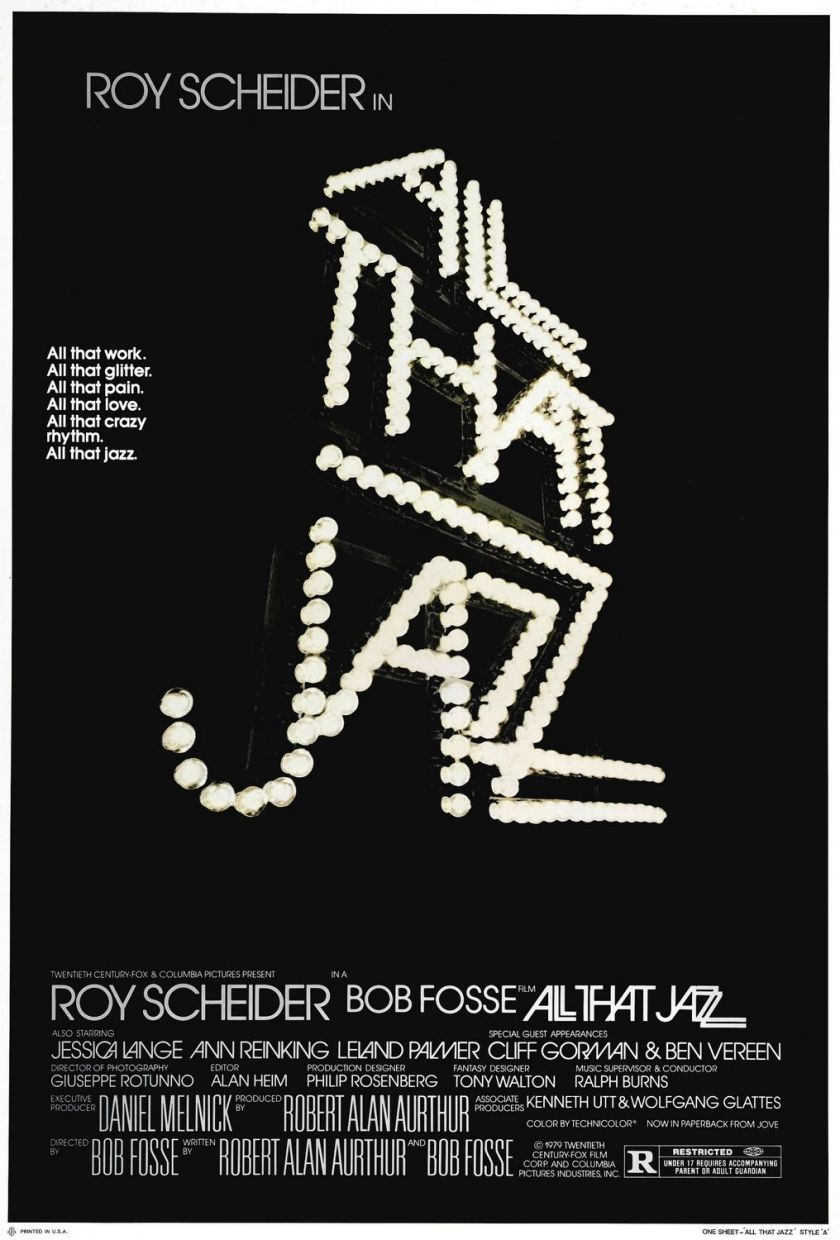 Forty-one years ago today, the film All That Jazz premiered. Everything about this movie will make you feel good. You need to watch this movie.

Joe Gideon is a theater director and choreographer trying to balance staging his latest Broadway musical, NY/LA, while editing a Hollywood film he has directed, The Stand-Up. He is a workaholic who chain-smokes cigarettes and a womanizer who constantly flirts and has sex with a stream of women. Each morning, to keep himself going, he plays a tape of Vivaldi and takes doses of Visine, Alka-Seltzer, and Dexedrine, always finishing by looking at himself in the mirror and telling himself “It’s showtime, folks!”. Joe’s ex-wife, Audrey Paris, is involved with the production of the show, but disapproves of his womanizing ways. Meanwhile, his girlfriend Katie Jagger and daughter Michelle keep him company. In his imagination, he flirts with an angel of death named Angelique in a nightclub setting, chatting with her about his life.

As Joe continues to be dissatisfied with his editing job, repeatedly making minor changes to a single monologue, he takes his anger out on the dancers and in his choreography, putting on a highly sexualized number with topless women during one rehearsal and frustrating both Audrey and the show’s penny-pinching backers. The only moment of joy in his life occurs when Katie and Michelle perform a Fosse-style number for Joe as an homage to the upcoming release of The Stand-Up, moving him to tears. During a particularly stressful table-read of NY/LA, Joe experiences severe chest pains and is admitted to the hospital with severe angina. Joe brushes off his symptoms, and attempts to leave to go back to rehearsal, but he collapses in the doctor’s office and is ordered to stay in the hospital for several weeks to rest his heart and recover from his exhaustion. NY/LA is postponed, but Gideon continues his antics from the hospital bed, continuing to smoke and drink while having endless strings of women come through his room; as he does, his condition continues to deteriorate, despite Audrey and Katie both remaining by his side for support. A negative review for The Stand-Up — which has been released during Joe’s time in the hospital — comes in despite the film’s monetary success, and Gideon has a massive coronary event.

As Joe undergoes coronary artery bypass surgery, the producers of NY/LA realize that the best way to recoup their money and make a profit is to bet on Gideon’s dying: the insurance proceeds would result in a profit of over half a million dollars. As Gideon goes on life support, he directs extravagant musical dream sequences in his own head starring his daughter, wife, and girlfriend, who all berate him for his behavior; he realizes he cannot avoid his own death, and has another heart attack. As the doctors try to save him, Joe runs away from his hospital bed behind their backs and explores the basement of the hospital and the autopsy ward before he allows himself to be taken back. He goes through the five stages of grief — anger, denial, bargaining, depression and acceptance — featured in the stand-up routine he had been editing, and as he gets closer to death, his dream sequences become more and more hallucinatory. As the doctors try one more time to save him, Joe imagines a monumental variety show featuring everyone from his past where he takes center stage in an extensive musical number. In his dying dream, Joe is able to thank his family and acquaintances as he cannot from his hospital bed, and his performance receives a massive standing ovation. Joe finally dreams of himself traveling down a hallway to meet Angelique at the end, but the film then abruptly cuts to his corpse being zipped up in a body bag.