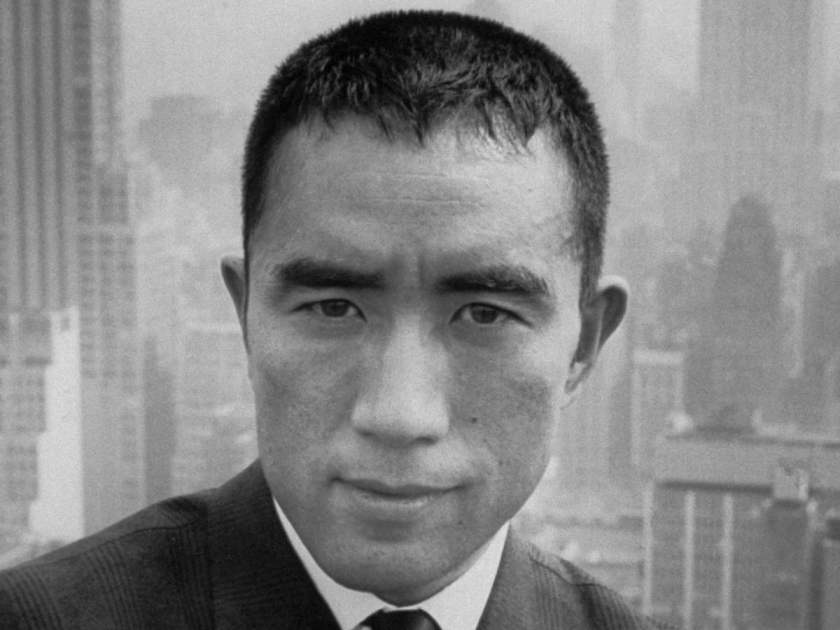 Today is the 97th birthday of the author, poet, playwright, actor, model, Shintoist, nationalist, and Tatenokai founder: Yukio Mishima. The world is a better place because he was in it and still feels the loss that he has left.

Prolific writer who is regarded by many critics as the most important Japanese novelist of the 20th century.

Mishima was the son of a high civil servant and attended the aristocratic Peers School in Tokyo. During World War II, having failed to qualify physically for military service, he worked in a Tokyo factory, and after the war he studied law at the University of Tokyo. In 1948–49 he worked in the banking division of the Japanese Ministry of Finance. His first novel, Kamen no kokuhaku (1949; Confessions of a Mask), is a partly autobiographical work that describes with exceptional stylistic brilliance a homosexual who must mask his sexual preferences from the society around him. The novel gained Mishima immediate acclaim, and he began to devote his full energies to writing.

He followed up his initial success with several novels whose main characters are tormented by various physical or psychological problems or who are obsessed with unattainable ideals that make everyday happiness impossible for them. Among these works are Ai no kawaki (1950; Thirst for Love), Kinjiki (1954; Forbidden Colors), and Shiosai (1954; The Sound of Waves). Kinkaku-ji (1956; The Temple of the Golden Pavilion) is the story of a troubled young acolyte at a Buddhist temple who burns down the famous building because he himself cannot attain to its beauty. Utage no ato (1960; After the Banquet) explores the twin themes of middle-aged love and corruption in Japanese politics. In addition to novels, short stories, and essays, Mishima also wrote plays in the form of the Japanese Nō drama, producing reworked and modernized versions of the traditional stories. His plays include Sado kōshaku fujin (1965; Madame de Sade) and Kindai nōgaku shu (1956; Five Modern Nōh Plays).

Mishima’s last work, Hōjō no umi (1965–70; The Sea of Fertility), is a four-volume epic that is regarded by many as his most lasting achievement. Its four separate novels—Haru no yuki (Spring Snow), Homma (Runaway Horses), Akatsuki no tera (The Temple of Dawn), and Tennin gosui (The Decay of the Angel)—are set in Japan and cover the period from about 1912 to the 1960s. Each of them depicts a different reincarnation of the same being: as a young aristocrat in 1912, as a political fanatic in the 1930s, as a Thai princess before and after World War II, and as an evil young orphan in the 1960s. These books effectively communicate Mishima’s own increasing obsession with blood, death, and suicide, his interest in self-destructive personalities, and his rejection of the sterility of modern life.

Mishima’s novels are typically Japanese in their sensuous and imaginative appreciation of natural detail, but their solid and competent plots, their probing psychological analysis, and a certain understated humor helped make them widely read in other countries.

The short story “Yukoku” (“Patriotism”) from the collection Death in Midsummer, and Other Stories (1966) revealed Mishima’s own political views and proved prophetic of his own end. The story describes, with obvious admiration, a young army officer who commits seppuku, or ritual disembowelment, to demonstrate his loyalty to the Japanese emperor. Mishima was deeply attracted to the austere patriotism and martial spirit of Japan’s past, which he contrasted unfavorably to the materialistic Westernized people and the prosperous society of Japan in the postwar era. Mishima himself was torn between these differing values. Although he maintained an essentially Western lifestyle in his private life and had a vast knowledge of Western culture, he raged against Japan’s imitation of the West. He diligently developed the age-old Japanese arts of karate and kendo and formed a controversial private army of about 80 students, the Tate no Kai (Shield Society), with the aim of preserving the Japanese martial spirit and helping to protect the emperor (the symbol of Japanese culture) in case of an uprising by the left or a communist attack.

On November 25, 1970, after having that day delivered the final installment of The Sea of Fertility to his publisher, Mishima and four Shield Society followers seized control of the commanding general’s office at a military headquarters near downtown Tokyo. He gave a 10-minute speech from a balcony to a thousand assembled servicemen in which he urged them to overthrow Japan’s post-World War II constitution, which forbids war and Japanese rearmament. The soldiers’ response was unsympathetic, and Mishima then committed seppuku in the traditional manner, disemboweling himself with his sword, followed by decapitation at the hands of a follower. This shocking event aroused much speculation as to Mishima’s motives as well as regret that his death had robbed the world of such a gifted writer.

Is the subject of documentaries:
Mishima: A Life in Four Chapters, 1985, DETAILS: Paul Schrader, music by Philip Glass