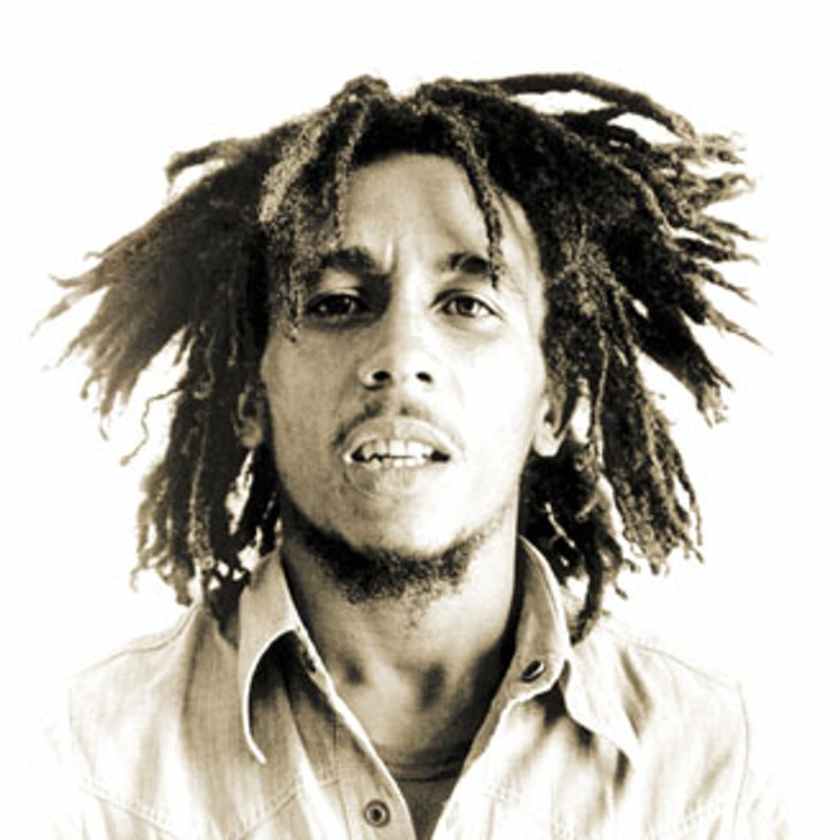 Today is the 77th birthday of the musician, activist, and cultural icon Bob Marley. His contribution to the world defies categories and cultures, unites differences, and continues to inspire and ignite activism and the search for truth in people everywhere. The world is a better place because he was in it and still feels the loss that he has left.

BEST KNOWN FOR: Jamaican singer, musician and songwriter Bob Marley served as a world ambassador for reggae music and sold more than 20 million records throughout his career.

Born on February 6, 1945, in St. Ann Parish, Jamaica, Marley helped introduce reggae music to the world and remains one of the genre’s most beloved artists to this day. The son of a Black teenage mother and much older, later absent white father, he spent his early years in St. Ann Parish, in the rural village known as Nine Miles.

One of his childhood friends in St. Ann was Neville “Bunny” O’Riley Livingston. Attending the same school, the two shared a love of music. Bunny inspired Marley to learn to play the guitar. Later Livingston’s father and Marley’s mother became involved, and they all lived together for a time in Kingston, according to Christopher John Farley’s Before the Legend: The Rise of Bob Marley.

Arriving in Kingston in the late 1950s, Marley lived in Trench Town, one of the city’s poorest neighborhoods. He struggled in poverty, but he found inspiration in the music around him. Trench Town had a number of successful local performers and was considered the Motown of Jamaica. Sounds from the United States also drifted in over the radio and through jukeboxes. Marley liked such artists as Ray Charles, Elvis Presley, Fats Domino, and the Drifters.

Marley and Livingston devoted much of their time to music. Under the guidance of Joe Higgs, Marley worked on improving his singing abilities. He met another student of Higgs, Peter McIntosh (later Peter Tosh) who would play an important role in Marley’s career.

A local record producer, Leslie Kong, liked Marley’s vocals and had him record a few singles, the first of which was “Judge Not,” released in 1962. While he did not fare well as a solo artist, Marley found some success joining forces with his friends. In 1963, Marley, Livingston, and McIntosh formed the Wailing Wailers. Their first single, “Simmer Down,” went to the top of the Jamaican charts in January 1964. By this time, the group also included Junior Braithwaite, Beverly Kelso and Cherry Smith.

The group became quite popular in Jamaica, but they had difficulty making it financially. Braithewaite, Kelso, and Smith left the group. The remaining members drifted apart for a time. Marley went to the United States where his mother was now living. However, before he left, he married Rita Anderson on February 10, 1966.

After eight months, Marley returned to Jamaica. He reunited with Livingston and McIntosh to form the Wailers. Around this time, Marley was exploring his spiritual side and developing a growing interest in the Rastafarian movement. Both religious and political, the Rastafarian movement began in Jamaica in 1930s and drew its beliefs from many sources, including Jamaican nationalist Marcus Garvey, the Old Testament and their African heritage and culture.

For a time in the late 1960s, Marley worked with pop singer Johnny Nash. Nash scored a worldwide hit with Marley’s song “Stir It Up.” The Wailers also worked with producer Lee Perry during this era; some of their successful songs together were “Trench Town Rock,” “Soul Rebel” and “Four Hundred Years.”

The Wailers got their big break in 1972 when they landed a contract with Island Records, founded by Chris Blackwell. For the first time, the group hit the studios to record a full album. The result was the critically acclaimed Catch a Fire. To support the record, the Wailers toured Britain and the United States in 1973, performing as an opening act for both Bruce Springsteen and Sly & the Family Stone. That same year, the group released their second full album, Burnin’, featuring the hit song “I Shot the Sheriff.” Rock legend Eric Clapton released a cover of the song in 1974, and it became a No. 1 hit in the United States.

Before releasing their next album, 1975’s Natty Dread, two of the three original Wailers left the group; McIntosh and Livingston decided to pursue solo careers as Peter Tosh and Bunny Wailer, respectively. Natty Dread reflected some of the political tensions in Jamaica between the People’s National Party and the Jamaica Labour Party. Violence sometimes erupted due to these conflicts. “Rebel Music (3 O’clock Road Block)” was inspired by Marley’s own experience of being stopped by army members late one night prior to the 1972 national elections, and “Revolution” was interpreted by many as Marley’s endorsement for the PNP.

For their next tour, the Wailers performed with I-Threes, a female group whose members included Marcia Griffiths, Judy Mowatt, and Marley’s wife, Rita. Now called Bob Marley & The Wailers, the group toured extensively and helped increase reggae’s popularity abroad. In Britain in 1975, they scored their first Top 40 hit with “No Woman, No Cry.”

Already a much-admired star in his native Jamaica, Marley was on his way to becoming an international music icon. He made the U.S. music charts with the album Rastaman Vibration in 1976. One track stands out as an expression of his devotion to his faith and his interest in political change: “War.” The song’s lyrics were taken from a speech by Haile Selassie, the 20th century Ethiopian emperor who is seen as a type of a spiritual leader in the Rastafarian movement. A battle cry for freedom from oppression, the song discusses a new Africa, one without the racial hierarchy enforced by colonial rule.

Back in Jamaica, Marley continued to be seen as a supporter of the People’s National Party. And his influence in his native land was seen as a threat to the PNP’s rivals. This may have led to the assassination attempt on Marley in 1976. A group of gunmen attacked Marley and the Wailers while they were rehearsing on the night of December 3, 1976, two days before a planned concert in Kingston’s National Heroes Park. One bullet struck Marley in the sternum and the bicep, and another hit his wife, Rita, in the head. Fortunately, the Marleys were not severely injured, but manager Don Taylor was not as fortunate. Shot five times, Taylor had to undergo surgery to save his life. Despite the attack and after much deliberation, Marley still played at the show. The motivation behind the attack was never uncovered, and Marley fled the country the day after the concert.

Living in London, England, Marley went to work on Exodus, which was released in 1977. The title track draws an analogy between the biblical story of Moses and the Israelites leaving exile and his own situation. The song also discusses returning to Africa. The concept of Africans and decedents of Africans repatriating their homeland can be linked to the work of Garvey. Released as a single, “Exodus” was a hit in Britain, as were “Waiting in Vain” and “Jamming,” and the entire album stayed on the U.K. charts for more than a year. Today, Exodus is considered to be one of the best albums ever made.

Marley had a health scare in 1977. He sought treatment in July of that year on a toe he had injured earlier that year. After discovering cancerous cells in his toe, doctors suggested amputation. Marley refused to have the surgery, however, because his religious beliefs prohibited amputation.

While working on Exodus, Marley and the Wailers recorded songs that were later released on the album Kaya (1978). With love as its theme, the work featured two hits: “Satisfy My Soul” and “Is This Love.” Also in 1978, Marley returned to Jamaica to perform his One Love Peace Concert, where he got Prime Minister Michael Manley of the PNP and opposition leader Edward Seaga of the JLP to shake hands on stage.

That same year, Marley made his first trip to Africa, and visited Kenya and Ethiopia—an especially important nation to him, as it’s viewed as the spiritual homeland of Rastafarians. Perhaps inspired by his travels, his next album, Survival (1979), was seen as a call for both greater unity and an end to oppression on the African continent. In 1980, Bob Marley & The Wailers played an official independence ceremony for the new nation of Zimbabwe.

A huge international success, Uprising (1980) featured “Could You Be Loved” and “Redemption Song.” Known for its poetic lyrics and social and political importance, the pared down, folk-sounding “Redemption Song” was an illustration of Marley’s talents as a songwriter. One line from the song reads: “Emancipate yourselves from mental slavery; none but ourselves can free our minds.”

On tour to support the album, Bob Marley & The Wailers traveled throughout Europe, playing in front of large crowds. They also planned a series of concerts in the United States, but the group would play only three concerts there — two at Madison Square Garden in New York City and one performance at the Stanley Theater in Pittsburgh, Pennsylvania — before Marley became ill. The cancer discovered earlier in his toe had spread throughout his body.

Traveling to Europe, Marley underwent unconventional treatment in Germany and was subsequently able to fight off the cancer for months. It soon became clear that Marley didn’t have much longer to live, however, so the musician set out to return to his beloved Jamaica one last time. Sadly, he would not manage to complete the journey, dying in Miami, Florida, on May 11, 1981.

Shortly before his death, Marley had received the Order of Merit from the Jamaican government. He had also been awarded the Medal of Peace from the United Nations in 1980. Adored by the people of Jamaica, Marley was given a hero’s send-off. More than 30,000 people paid their respects to the musician during his memorial service, held at the National Arena in Kingston, Jamaica. Rita Marley, Marcia Griffiths, Judy Mowatt sang and the Wailers performed at the ceremony.

Marley achieved several great accomplishments during his lifetime, including serving as a world ambassador for reggae music, earning induction into the Rock and Roll Hall of Fame in 1994, and selling more than 20 million records—making him the first international superstar to emerge from the so-called Third World.

Decades after his passing, Marley’s music remains widely acclaimed. His musical legacy has also continued through his family and longtime bandmates; Rita continues to perform with the I-Threes, the Wailers and some of the Marley children. (Marley reportedly fathered nine children, though reports vary.) Marley’s sons, David “Ziggy” and Stephen, and daughters Cedella and Sharon (Rita’s daughter from a previous relationship who was adopted by Marley) played for years as Ziggy Marley & the Melody Makers, later performing as the Melody Makers. (Ziggy and Stephen have also had solo successes.) Sons Damian “Gong Jr.” Ky-Mani and Julian are also talented recording artists. Other Marley children are involved in family-related businesses, including the Tuff Gong record label, founded by Marley in the mid-1960s.

In January 2018, Island Records founder Chris Blackwell sold the majority of his rights to Marley’s catalog to Primary Wave Music Publishing, known for its branding and marketing campaigns for “the icons and legends business.” Said Primary Wave founder Larry Mestel, “There isn’t a crevice of the world where Bob Marley isn’t a god.”

Marley’s commitment to fighting oppression also continues through an organization that was established in his memory by the Marley family: The Bob Marley Foundation is devoted to helping people and organizations in developing nations.