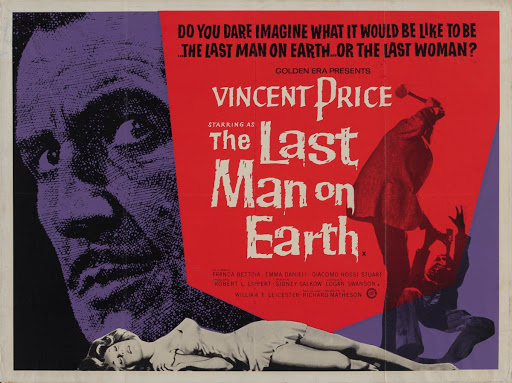 Fifty-eight years ago today, the film The Last Man on Earth premiered. Since the film is in the public domain, the full version is posted below. You should watch this movie.

It is 1968, and Dr. Robert Morgan lives in a world where everyone else has been infected by a plague that has turned them into undead, vampiric creatures that cannot stand sunlight, fear mirrors, and are repelled by garlic. They would kill Morgan if they could, but they are weak and unintelligent. Every day Morgan carries out the same routine: he wakes up, marks another day on the calendar, gathers his weapons, and then goes hunting for vampires, killing as many as he can and then burning the bodies to prevent them from coming back. At night, he locks himself inside his house.

A flashback sequence explains that, three years earlier, Morgan’s wife Virginia and daughter Kathy had succumbed to the plague before it was widely known by the public that the dead would return to life. Instead of taking his wife to the same public burn pit used to dispose of his daughter’s corpse, Morgan buried her without the knowledge of the authorities. When his wife returned to his home and attacked him, Morgan became aware of the need to kill the plague victims with a wooden stake. Morgan hypothesizes that he is immune to the bacteria from a bite by an infected vampire bat when he was stationed in Panama, which may have introduced a diluted form of the plague into his blood.

One day, a dog appears in the neighborhood. Desperate for companionship, Morgan chases after the dog but does not catch it. Sometime later the dog appears, wounded, at Morgan’s doorstep. He takes the dog into his home and treats its wounds, looking forward to having company for the first time in three years. He quickly discovers, however, that it, too, has become infected with the plague. Morgan is seen burying the dog, which he has impaled with a wooden stake. Morgan sinks further into depression and loneliness.

After burying the dog, Morgan spots a woman in the distance. The woman, Ruth, is terrified of Morgan at first sight and runs from him. Morgan convinces her to return to his home, but he is suspicious of her true nature. Ruth becomes ill when Morgan waves garlic in her face, who claims that she has a weak stomach. Morgan’s suspicion that Ruth is infected is confirmed when he discovers her attempting to inject herself with a combination of blood and vaccine that holds the disease at bay. Ruth initially draws a gun on Morgan but ultimately surrenders it to him. She tells him that she is part of a group of people like her — infected, but under treatment — and was sent to spy on Morgan. The vaccine allows the people to function normally with the drug in the bloodstream, but once it wears off, the infection takes over the body again. Ruth explains that her people are planning to rebuild society as they destroy the remaining humans, and that many of the vampires Morgan killed were still alive. Ruth desperately urges Morgan to flee, but he inexplicably refuses.

While Ruth is asleep, Morgan transfuses his own blood into her. She is immediately cured, and Morgan sees hope that, together, they can cure the rest of her people. Moments later, however, Ruth’s people attack. Morgan takes the gun and flees his home while the attackers kill the vampires gathered around Morgan’s home. Ruth’s people spot Morgan and chase him. He exchanges gunfire with them and picks up tear gas grenades from a police station armory along the way. While the tear gas delays his pursuers somewhat, Morgan is wounded by gunfire and retreats into a church. As he stands at the altar, one of his pursuers finally impales him with a thrown spear. In his final moments, Morgan denounces his pursuers as “freaks” and, as Ruth cradles him, declares that he is the last true man on Earth. As Ruth walks away from Morgan’s body, she notices a baby crying and tries to assure the child that everyone is safe now.