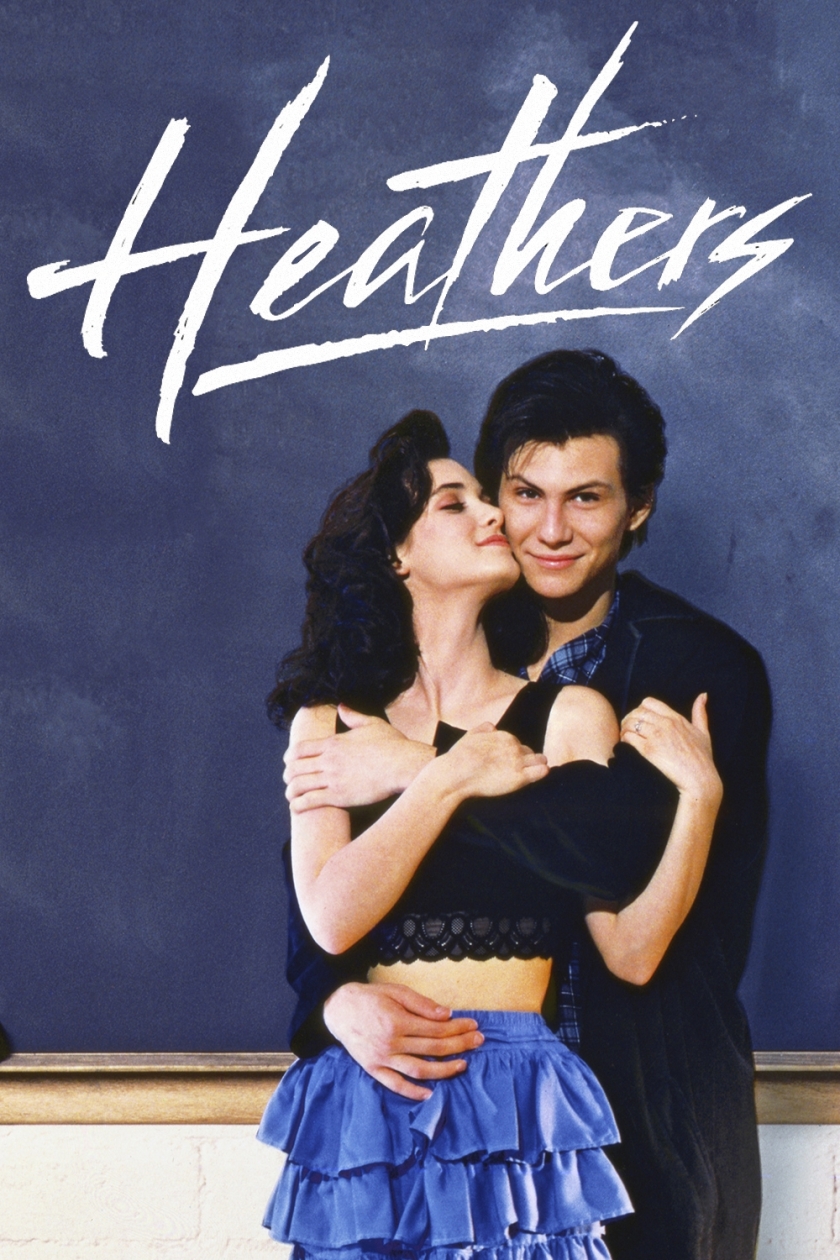 Thirty-three years ago today, the film Heathers premiered. I have seen this film more times than I can even guess, I know every single line of dialogue. It You have to watch this film.

Veronica Sawyer is one of the popular girls at Westerburg High School in Sherwood, Ohio. She is part of a popular but feared clique that also consists of three other wealthy and beautiful girls with the same first name: Heather Chandler, Heather Duke, and Heather McNamara. She has grown tired of them and longs to return to her old life with her “nerdy” friends.

One day, new student and rebellious outsider Jason “J.D.” Dean pulls a gun and fires blanks on jocks Kurt Kelly and Ram Sweeney in response to them bullying him. Veronica observes this and finds herself fascinated. She later attends a frat party with Heather Chandler. After refusing to have sex with a frat brother, and vomiting on Chandler, the latter vows to destroy her reputation. J.D. shows up at Veronica’s house, and they end up having sex outside. They express to each other their mutual hatred of Chandler’s tyranny. The next morning, Veronica and J.D. break into Chandler’s house. J.D. jokingly puts drain cleaner in a mug with the intention of giving it to Chandler but Veronica quickly shuts him down. She mixes orange juice and milk together instead as an attempt to make her throw up and get revenge. However, she gets the cups mixed up. J.D. notices this, and hands Chandler the mug with the drain cleaner. She drinks it, crashes through a glass table, and dies. Veronica panics but J.D. urges her to forge a dramatic suicide note in Chandler’s handwriting. The school and community look on Chandler’s apparent suicide as a tragic decision made by a troubled teenager, making her more worshipped in death than in life. Duke soon steps into the role of clique leader and begins wearing a red scrunchie that had belonged to Chandler.

McNamara convinces Veronica to go with her, Kurt and Ram on a double date, during which the boys end up drunk and pass out in cow manure. The following day, they spread a false rumor about Veronica performing oral sex on them, ruining her reputation. J.D. proposes that she lure them into the woods with the promise to “make the rumors true,” then shoot them with nonfatal bullets. J.D. shoots and kills Ram but Veronica misses Kurt, who runs away. J.D. chases Kurt back towards Veronica, who fatally shoots him. J.D. plants material next to the boys implying that they were gay, and a note stating the two were lovers participating in a suicide pact. Veronica then realises the bullets were real. At their funeral, the boys are made into martyrs against homophobia. Although she keeps dating J.D., Veronica is increasingly disturbed by his behavior. Martha Dunnstock, an obese student, pins a suicide note to her chest and walks into traffic. She survives but is badly injured, and she is mocked for trying to “act like the popular kids.” McNamara calls a radio show one night while Veronica and Duke are listening and talks of depression in her life; the next day, Duke tells the entire school about the radio call. McNamara attempts to take her life by overdosing in the girls’ bathroom but she is saved by Veronica. She tells J.D. that she will not participate in any more killings.

J.D. blackmails Duke into getting everyone to sign a petition that unbeknownst to her is intended to act as a mass suicide note. Veronica has a nightmare where J.D. kills Duke, and she sees the undead Chandler at the funeral. She wakes up and writes what appears a suicide note in her diary, then stages a hanging (actually tying a harness around her waist to support her weight) for J.D. to see as he climbs into her room with a revolver. Assuming she is dead, J.D. rambles about his intent to kill her, had she not committed suicide, and his plan to blow up the school during a pep rally. Veronica reveals to her mother that she is not dead, and at school the next day, she confronts J.D. in the boiler room while he is planting dynamite. She shoots him when he refuses to stop the bombing. As J.D. collapses, his switchblade cuts the wires to the detonator, and it stops. Veronica walks out through the pep rally while everyone is cheering. The severely injured J.D. follows her outside with a bomb strapped to his chest, offers a personal eulogy, and detonates the bomb. She confronts Duke, takes the red scrunchie, and vows to change the way things are. She then invites Martha Dunnstock to hang out on prom night and watch movies with her. Martha and Veronica head down the hallway while Duke watches.