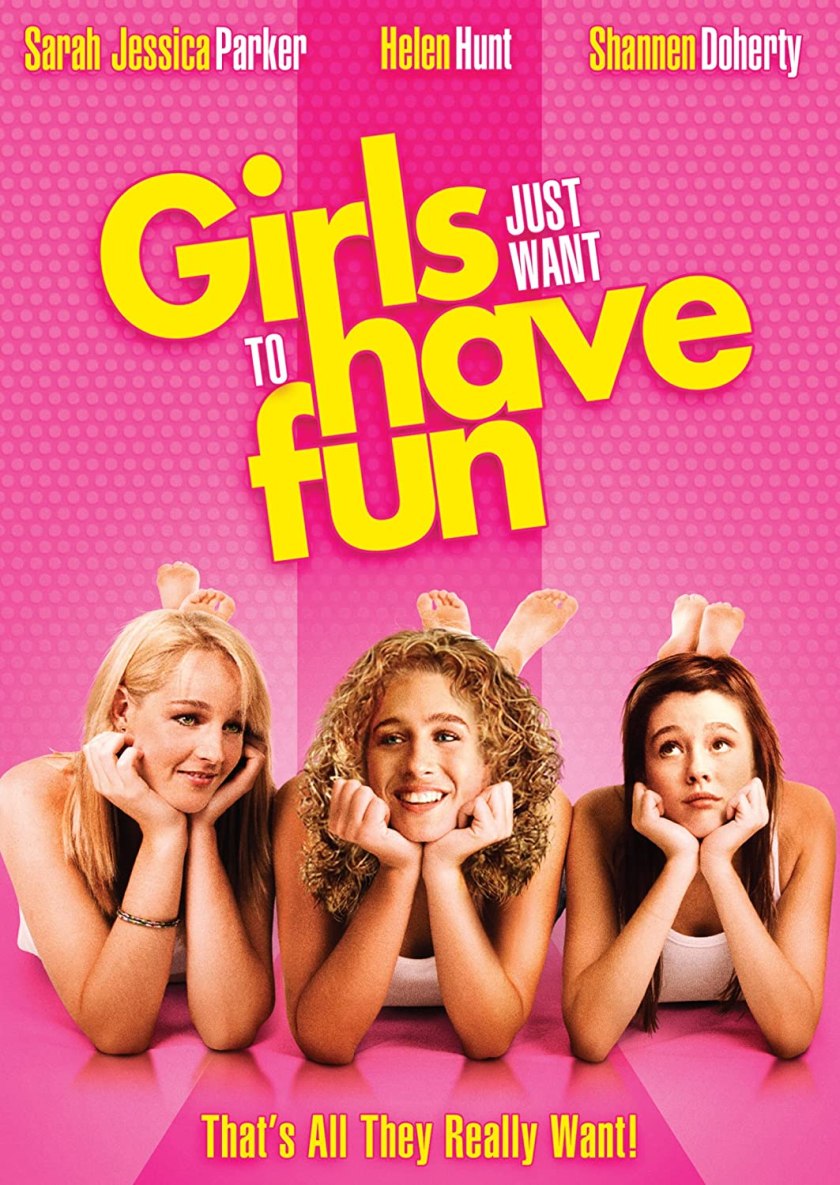 Thirty-seven years ago today, the film Girls Just Wanna Have Fun premiered. You have to watch it and listen to the soundtrack!

Janey Glenn is an army brat whose father Robert has retired from the Army and relocated to Chicago, the home of her favorite dance show Dance TV. At her Catholic girls school, she quickly makes a new friend in Lynne Stone due to their shared love of Dance TV. Although Robert nixes the idea of her traveling to downtown Chicago to try out as a dancer for Dance TV, Janey accompanies Lynne to the auditions anyway.

At the auditions, an enemy is made of spoiled rich girl Natalie Sands when she narrowly misses Lynne while parking her car. The auditions are going well until Lynne’s partner is cut (it is later discovered that Natalie bribed Lynne’s partner to sabotage her audition). Janey and a local high school kid, Jeff, both shine, and are partnered together once they make the finals. Jeff loves to dance, though he feels pressured to attend trade school after graduation, like his father did before him.

The two butt heads initially due to their disparate upbringings. Despite Jeff’s natural ability to dance, he has never taken a class. Janey has been taking both gymnastics and dance classes for ten years. Helping them to get off on the wrong foot is also Janey’s inability to practice, due to her strict father’s rules. Things are further complicated by Natalie’s meddling as she finds out that Janey skipped choir practice to meet Jeff and calls her father to tell, posing as “Sister Natalie”.

An excellent opportunity for both girls to get back at Natalie presents itself when Jeff is invited to her coming out party. They make hundreds of copies of her invitation (provided by Jeff’s best friend Drew) and pass them out to quite a few odd characters all over town. Jeff and Drew attend the party and watch the chaos ensue when all of the oddballs that were given invites show up (as do Lynne, Janey and Jeff’s sister Maggie, watching from the window). Janey and Jeff have become close through their rehearsals. One night, he tells her to meet him not at the rehearsal studio but at a club. While they are enjoying some unstructured dance time, Jeff is taken away by a girl who locked her keys in her car. Meanwhile, a large admirer moves in on her. On Jeff’s return, a fight ensues and after Jeff sucker punches the much larger man, they run out of the club together. Once at Janey’s house, she is aglow over what her life has become: she is in the running to become a Dance TV regular, has a great best friend, as well as a boyfriend. They finally kiss before she excitedly runs inside.

Given the total wreck the party became, the rivalry with Natalie has intensified. She convinces her father to become more involved in ensuring her win. This is an easy feat considering that her father owns the company that Jeff’s father works for. One day, Natalie’s father, J.P. Sands, corners Jeff and tells him that if Natalie does not win, Jeff’s father will lose his job. This puts him in a bad mood and he has a falling-out with Janey when he arrives at rehearsal. Her mood quickly matches his when she arrives home and sneaks into the house only to find that her father has installed a security system. He then grounds her for her continuous deception, making it virtually impossible for her to attend the dance contest final the next day.

Meanwhile, Jeff’s surly attitude and decreased desire to be in the contest is noticed by his father. Once he finally gets his son to talk, he simply asks if he can win the contest. When Jeff answers yes, he is instructed to do so and not to worry about his father’s job. However, Janey is still on restriction and does not know Jeff has changed his mind. However, that changes when her little brother brings her a message that Jeff will compete and she employs Lynne to get her out of the house undetected.

Once Lynne arrives, Janey cuts the wires to the security system and escapes the clutches of the guard dog. When they arrive at the station, Janey makes the elevator up to the studio and Lynne does not. She barely makes the beginning of the show, embracing and kissing Jeff as she arrives. The show begins and the competition is underway. At home, Janey’s family turns on the television and sees her dancing. Her father, furious, storms out of the house, on the way to the studio. Meanwhile, Jeff’s father watches the show from his neighborhood pub, surrounded by friends who are all cheering on Jeff and Janey.

After all of the dancers have performed on the live show, the decision comes back: there is a tie between Janey and Jeff and Natalie and her partner. A dance-off ensues. Natalie goes first and when done, strolls off the stage proudly, believing she has won. But after Janey tells Jeff “Let’s do it”, they pull out all the stops with a series of synchronized gymnastics Janey has taught Jeff over their time together. When the judges deliberate again, the decision is unanimous: Jeff and Janey win. Natalie is furious and begins to berate her partner over costing her the contest. When she goes to her father to complain, he finally puts his foot down and tells his spoiled daughter to shut up, to her amazement. When Janey spots her father in the studio, she thinks she is in for trouble, but he smiles and shows his enthusiasm at her obvious talent. Miss Dance TV is called to the stage and when she enters, it is none other than Lynne, who has received the job when the former Miss Dance TV quit during the show.