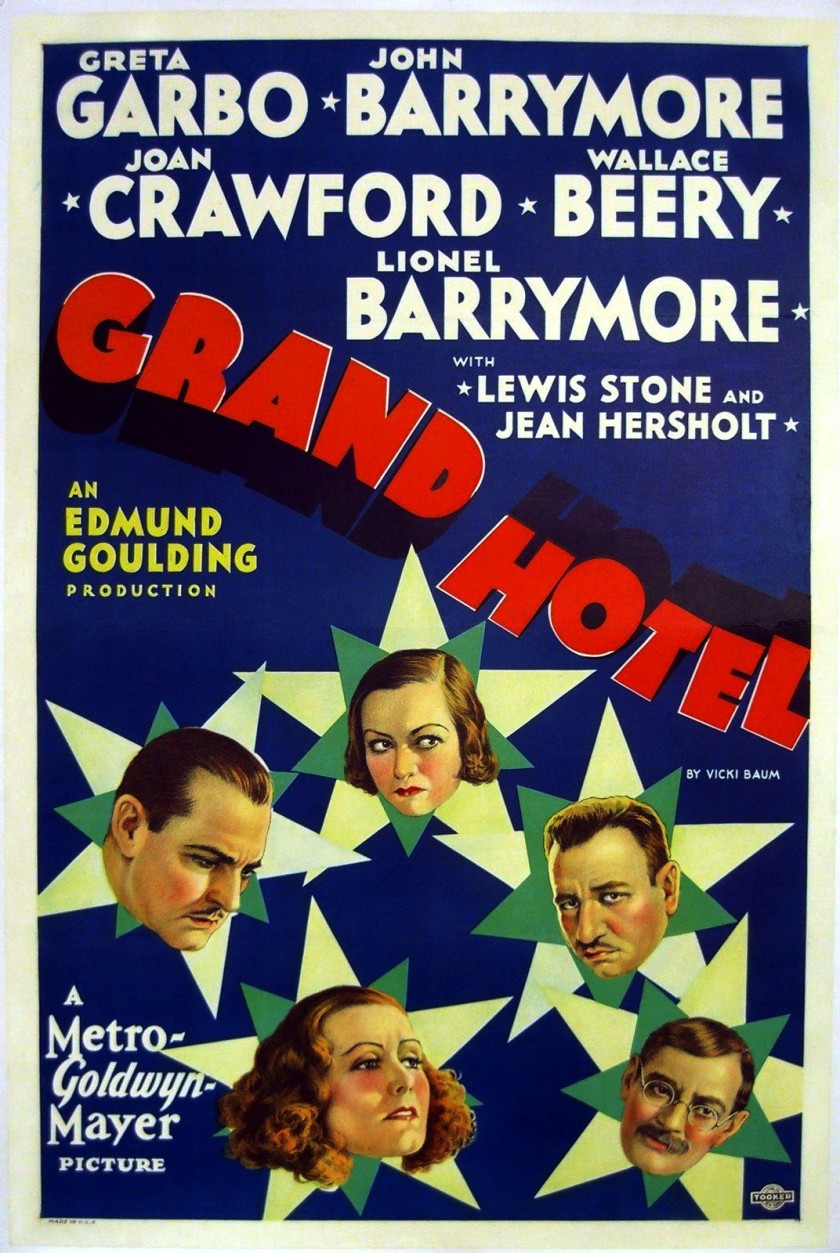 Ninety years ago today, the American pre-Code drama film Grand Hotel premiered. The screenplay by William A. Drake is based on the 1930 play of the same title by Drake, who had adapted it from the 1929 novel Menschen im Hotel by Vicki Baum. To date, it is the only film to have won the Academy Award for Best Picture without being nominated in any other category.

The film was remade as Week-End at the Waldorf in 1945, and also served as the basis for the 1989 Tony Award-winning stage musical Grand Hotel. A movie musical remake, to take place at Las Vegas’ MGM Grand Hotel, directed by Norman Jewison, was considered in 1977, and again in 1981, but eventually fell through.

Grand Hotel has proven influential in the years since its original release. The line “I want to be alone”, famously delivered by Greta Garbo, placed number 30 in AFI’s 100 Years…100 Movie Quotes. In 2007, the film was selected for preservation in the United States National Film Registry by the Library of Congress for being “culturally, historically, or aesthetically significant”.

Doctor Otternschlag, a disfigured veteran of World War I and a permanent resident of the Grand Hotel in Berlin, observes, “People coming, going. Nothing ever happens” — after which a great deal transpires.

Baron Felix von Gaigern, who squandered his fortune and supports himself as a card player and occasional jewel thief, befriends Otto Kringelein, a dying accountant who has decided to spend his remaining days in the lap of luxury. Kringelein’s former employer, industrialist General Director Preysing, is at the hotel to close an important deal, and he hires stenographer Flaemmchen to assist him. She aspires to be an actress and shows Preysing some magazine photos for which she posed.

Another guest is Russian ballerina Grusinskaya, whose career is on the wane. When the Baron is in her room to steal her jewelry and she returns from the theatre, he hides in her room and overhears as she talks to herself about wanting to end it all. He comes out of hiding and engages her in conversation, and Grusinskaya finds herself attracted to him. He spends the night with her. The following morning, the Baron returns Grusinskaya’s jewels, and she forgives his crime. She invites him to accompany her to Vienna, an offer he accepts.

The Baron is desperate for money to pay his way out of the criminal group he has been working with. He and Kringelein get a card game going, and Kringelein wins everything, then becomes intoxicated. When he drops his wallet, the Baron stashes it in his pocket, intending to keep not only the winnings but the funds that will see Kringelein through the last weeks of his life. However, moved by the sight of Kringelein’s despair, the Baron – who desperately needs the money, but has become very fond of Kringelein – pretends to have discovered the wallet, and returns it to him.

As part of a desperate merger plan, Preysing must travel to London, and he asks Flaemmchen to accompany him. Later, when the two are in her room—which opens onto his—Preysing sees the shadow of the Baron rifling through his belongings. He confronts the Baron; the two struggle, and Preysing bludgeons the Baron with the telephone, killing him. Flaemmchen sees what happened and tells Kringelein, who confronts Preysing. He insists he acted in self-defense, but Kringelein summons the police, and Preysing is arrested.

Grusinskaya departs for the train station, expecting to find the Baron waiting for her there. Meanwhile, Kringelein offers to take care of Flaemmchen, who suggests they seek a cure for his illness. As they leave the hotel, Doctor Otternschlag again observes, “Grand Hotel. Always the same. People come. People go. Nothing ever happens.”