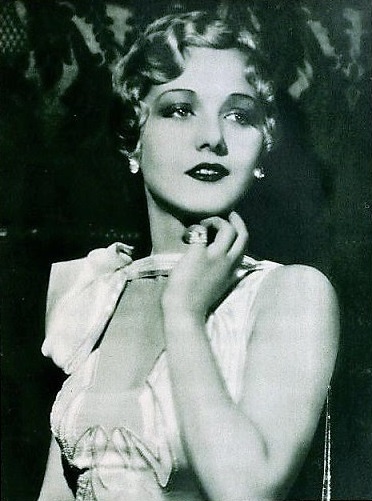 Today is the 117th birthday of the silent film actress, model, and vaudevillian Leila Hyams. The world is a better place because she was in it and still feels the loss that she has left.

She was born in New York City to vaudeville comedy performers John Hyams and Leila. Both parents appeared in films and mother Leila Senior was also a noted stage performer; her parents can later be seen together in several Hollywood films such as in 1939’s The Housekeeper’s Daughter. Hyams appeared on stage with her parents while still a child, working in their vaudeville act for five years.

As a teenager, she worked as a model and became well known across the United States after appearing in a successful series of newspaper advertisements. This success led her to Hollywood.

She made her first film in 1924, and with her blonde hair, green eyes, delicate features, and good-natured demeanor, was cast in a string of supporting roles, where she was required to do very little but smile and look pretty. She proved herself capable of handling the small roles she was assigned, and over a period of time, she came to be taken seriously as an actress. By 1928, she was playing starring roles, achieving success in MGM’s first talkie release, Alias Jimmy Valentine (1928) opposite William Haines, Lionel Barrymore, and Karl Dane. The following year, she appeared in the popular murder mystery The Thirteenth Chair, a role that offered her the chance to display her dramatic abilities as a murder suspect. At Fox that same year, she appeared in director Allan Dwan’s now lost romantic adventure The Far Call opposite Charles Morton. The quality of her parts continued to improve as the decade turned, including a role as Robert Montgomery’s sister in the prison drama The Big House (1930) with Chester Morris and Wallace Beery, for which Hyams once again received positive reviews. She then appeared in Surrender (1931) in which Warner Baxter and Ralph Bellamy desperately competed for her attention.

Although she succeeded in films that required her to play pretty ingenues, and developed into a capable dramatic actress in 1930s crime melodramas, she is perhaps best remembered for two early 1930s horror movies, as the wise-cracking but kind-hearted circus performer in Freaks (1932) and as the heroine in the Bela Lugosi film Island of Lost Souls (1932). Hyams was the original choice to play Jane in Tarzan the Ape Man (1932), but turned it down. The role was played by Maureen O’Sullivan. She also appeared in the once controversial Jean Harlow film Red-Headed Woman (1932), the musical comedy The Big Broadcast (1932) with Bing Crosby, George Burns, and Gracie Allen, and was praised for her comedic performance in Ruggles of Red Gap (1935). In 1935 she made 1,000 Dollars a Minute for Republic and retired soon after.

Hyams married her agent Phil Berg in 1927. In 1936, after a 12-year acting career and performing in 50 films, she retired from the motion-picture industry; nevertheless, she remained active in the Hollywood community for the rest of her life. In 1977, after a “brief illness”, Hyams died at age 72 at her home in Bel-Air in Los Angeles. She was survived by her husband Phil.