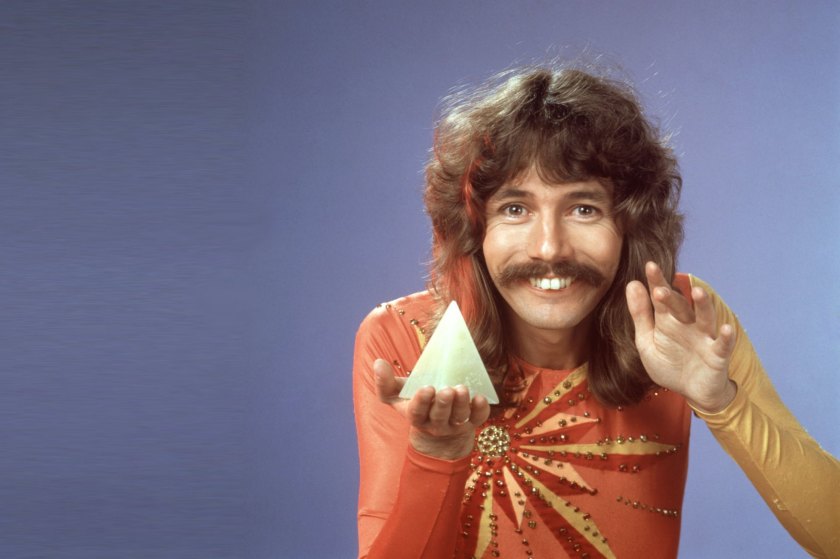 Today is the 75th birthday of the magician and friend of the Muppets Doug Henning. I loved his TV specials when I was a kid. Those teeth, those leotards, that mustache? It’s a lot to process, but so worth it. The world is a better place because he was in it and still feels the loss that he has left.

BEST KNOWN FOR: Doug Henning was a magician known the world over for his tricks performed on TV and Broadway and in Las Vegas.

Magician Doug Henning was born on May 3, 1947, in Fort Garry (near Winnepeg), Manitoba, Canada. Henning became fascinated by magic as a young boy growing up in Winnipeg, reportedly after watching a magician perform a levitation act on The Ed Sullivan Show. By age 14, he was performing at parties and had developed his own levitation act using his sister.

After graduating with a degree in psychology from McMaster College in Hamilton, Ontario, Henning won a grant from the Canadian government to study magic by convincing a panel of government officials that it could be considered an art form. Using the $4,000 in grant money and raising thousands more, he developed a successful stage show, Spellbound, which ran in Toronto.

In May 1974, Henning took his act to Broadway with The Magic Show, which, like Spellbound, delighted audiences with its unique blend of rock & roll, dance, and magic. For his part, Henning earned a Tony Award nomination and a reputation as one of the world’s best known magicians. During the four-and-a-half-year run of The Magic Show on Broadway, he performed regularly at casinos in Las Vegas and Lake Tahoe.

In 1975, he was asked by the producers at the National Broadcasting Company (NBC) to perform in his own television special. The inaugural Doug Henning’s World of Magic drew an impressive 50 million viewers, as Henning recreated famed magician Harry Houdini’s “Water Torture Escape” before a live studio audience. The show was an annual event from 1975 to 1982, earning an Emmy Award (and seven other nominations, including two straight nods for Best Variety Special).

Henning’s success continued into the first half of the 1980s, as he starred in a second acclaimed Broadway show, Merlin, earning five more Tony nominations. He consistently toured with his act, maintaining his status as an internationally acclaimed illusionist.

Henning was credited with single-handedly reviving the public’s interest in magic after a long slump by updating it and combining it with music, comedy, and flashy costumes to make it attractive to a whole new generation. He retired in the mid-1980s, selling some of his most famous illusions to another famous magician, David Copperfield.

In his retirement, Henning made several unsuccessful bids for political office, in England in 1992 and in Canada in the 1990s, as a member of the Natural Law Party. Fascinated with the practice of transcendental meditation, Henning dedicated much of his time and energy in later years to the foundation of a $1.5 billion theme park dedicated to the practice.

The park that Henning planned on building, which would be located near Niagara Falls, Ontario, was still in the planning stages when Henning was diagnosed with liver cancer in 1999. He died on February 7, 2000, at the age of 52, in Los Angeles, California, where he had lived with his second wife, artist Debby Douillard. Henning, who was previously married to the self-help author Barbara De Angelis, had no children.