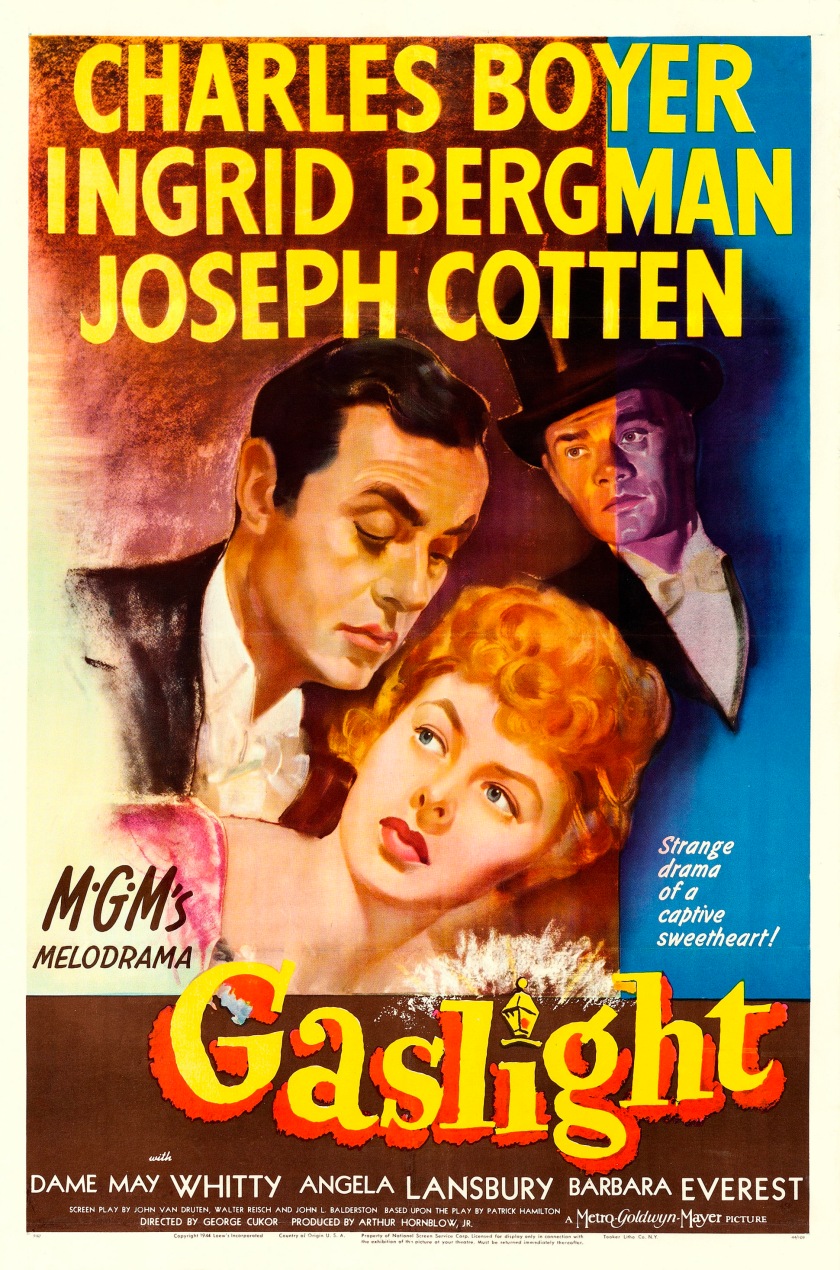 Seventy-eight years ago today, the film Gaslight premiered. It has a topnotch director and cast and a horribly disturbing plot that will live in the back of your mind for the rest of your life.

The psychological term gaslighting, which describes the form of psychological abuse in which the victim is gradually manipulated into doubting their own sanity, originated from the play and its two film adaptations.

It is a practice popularly used by several former bosses of mine, coincidentally.

World-famous opera singer Alice Alquist has just been murdered at her home, No. 9 Thornton Square, London. The perpetrator left without the valuable jewels, for which he had killed her, after being interrupted by Paula, Alice’s fourteen-year-old niece. Paula had been raised by her aunt Alice following her mother’s death. After Alice was murdered, Paula was sent to Italy to train to become an opera singer herself.

Years later, an adult Paula (Ingrid Bergman) meets and marries Gregory Anton (Charles Boyer) after a two-week-long whirlwind romance. At his insistence, Paula returns to London, where she has no friends, to live in the long-vacant London townhouse of her deceased aunt Alice. To help calm her anxiety over memory of her aunt’s violent murder, Gregory suggests that they store all of Alice’s furnishings in the attic. Before they do, Paula discovers, in an old book, a letter addressed to her aunt by a man named Sergis Bauer. Gregory’s reaction is violent. However, he explains his outburst as one of frustration at the bad memories his bride is experiencing.

After Alice’s belongings are locked away in the attic, events take a turn for the bizarre. At the Tower of London, Paula loses an heirloom brooch that Gregory had given her, despite its having been stored safely in her handbag just before going out. A picture disappears from its place on a wall and Gregory says that Paula took it, one of many instances of her removing and hiding things. But Paula has no recollection of having done so. Paula also hears footsteps coming from the sealed attic, and sees the gaslights dim and brighten for no apparent reason. Gregory suggests that these things exist only in her imagination.

Gregory gradually isolates his wife from the outside world, claiming that he is doing so for her own good, because her nerves have been acting up, causing her to become a kleptomaniac. He is also jealous and accusatory whenever others express an interest in her. When Gregory does take her out to a friend’s party, he shows Paula his watch-chain, from which his watch has mysteriously disappeared. When Gregory finds it in her handbag, Paula becomes hysterical in front of all the guests, and Gregory takes her home. Paula begins to believe she should not go out in public. Their young maid, Nancy (Angela Lansbury), worsens the situation, as Paula becomes convinced that Nancy loathes her. Gregory tells Paula that she is paranoid and is imagining the maid’s disdain, while he secretly flirts with her.

Paula does not know that her husband is really Sergis Bauer, her aunt’s murderer. He sought out Paula in Italy with the aim of getting Alice’s jewels. He has been secretly rummaging through Alice’s belongings in the attic to find the jewels which he is certain are still there. The footsteps Paula heard in the attic were actually his. The flickering gaslights which he claims she has imagined were caused by his turning on the attic lights, thus reducing the gas to the downstairs lights. The kleptomania exhibited by Paula is all sleight of hand by Gregory.

Gregory employs a cunning strategy to convince his wife that she is going mad, hoping to have her institutionalized, giving him power of attorney over her and allowing him to search unabated for the jewels. The plan almost works. Paula is saved by something that happened during her trip to the Tower of London, as it also resulted in a chance encounter with Inspector Brian Cameron of Scotland Yard (Joseph Cotten), an admirer of Alice Alquist since childhood. Seeing Paula, who looks very much like her aunt, rekindles Cameron’s interest in the cold case murder of Alice and her jewels, a royal gift, that had never been found. With the aid of a police patrolman, Cameron figures out that Gregory slips into a vacant house next door and enters his own attic via a skylight. Cameron eventually gets inside the house to see Paula and confirms that the gaslights are indeed flickering, and they discover the letter from Bauer that Gregory had told her was a figment of her imagination.

That same evening, Gregory at last discovers the jewels hidden in plain sight, disguised as costume jewelry. He returns home to find that Paula has apparently been visited by another man. Though he knows that he has been discovered, he throws Paula into confusion again, telling her that everything is in her imagination. However, Cameron suddenly appears and confronts Gregory, chasing him to the attic and finally arresting him. Paula follows them and, finally convinced of her own sanity, indulges in a bit of revenge. Alone with him now bound to a chair, he tries to convince her to cut him free so that he can escape. She taunts Gregory, musing that the knife in her hand might not be real, before calling in Cameron to take him away.