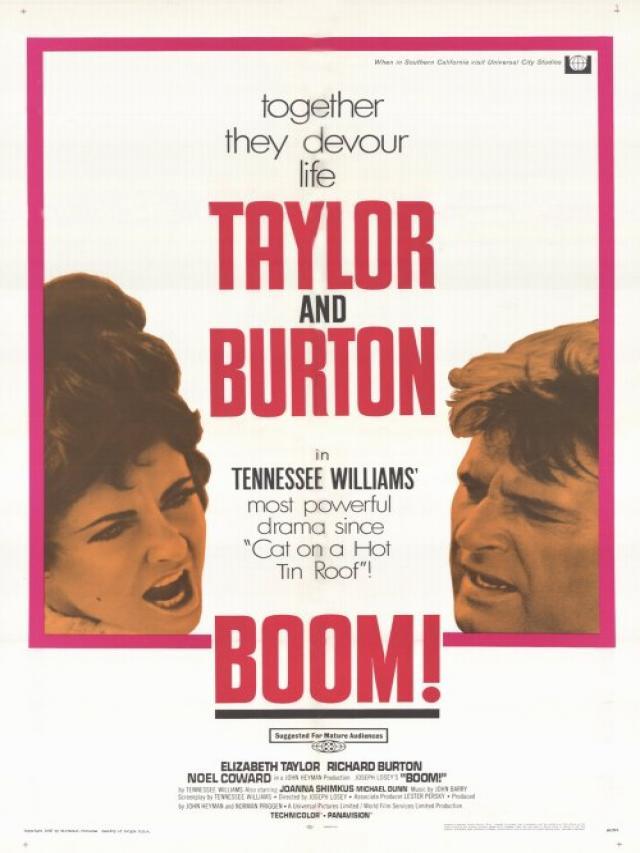 Fifty-four years ago today, the film Boom! premiered. Take Elizabeth Taylor, add Richard Burton and Noel Coward, mix in a screenplay written by Tennessee Williams based on a play by Tennessee Williams, music by John Barry (think James Bond themes), and even that hat she wears is designed by Karl Lagerfeld (for Tiziani of Rome). This movie does not fuck around, it is insane screaming over the house intercom and slapping the servants.  It’s having a cocktail while getting a blood transfusion.  It is perfection. Do yourself a favor and watch the full film included below.

Flora ‘Sissy’ Goforth (Taylor, in a part written for an older woman) is a terminally ill woman living with a coterie of servants in a large mansion on a secluded island. Into her life comes a mysterious man, Christopher Flanders, nicknamed “Angelo Del Morte” (played by then-husband Burton, in a part intended for a very young man). The mysterious man may or may not be “The Angel of Death”.

The film was received poorly by critics, and maintains an 8% rating at Rotten Tomatoes.

Time magazine wrote, “They display the self-indulgent fecklessness of a couple of rich amateurs hamming it up at the country-club.” Paul D. Zimmerman, writing for Newsweek, called it “a pompous, pointless nightmare.” The Hollywood Reporter called it, “An ordeal in tedium,” and Saturday Review called it, “Outright junk.” Lawrence Devine in the Los Angeles Herald-Examiner asked “Why was Boom! filmed in the first place?” Wilfred Sheed wrote in Esquire, “Let them [Taylor and Burton] by all means do their thing, but why film it and charge admission?” Richard Schickel wrote in Life Magazine, “That title could not be more apt; it is precisely the sound of a bomb exploding.”

Filmmaker John Waters admires the film, and chose it as a favorite to present in the first Maryland Film Festival in 1999. The film’s poster is visible in Waters’ 1972 film Pink Flamingos. In an interview with Robert K. Elder for his book The Best Film You’ve Never Seen, Waters describes the film as “beyond bad. It’s the other side of camp. It’s beautiful, atrocious, and it’s perfect. It’s a perfect movie, really, and I never tire of it.”