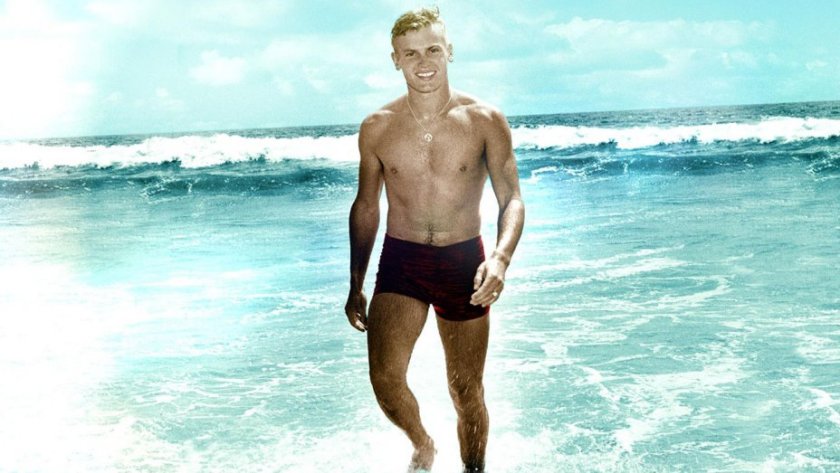 Today is the 91st birthday of the actor/singer/activist Tab Hunter. I was first introduced to him through his John Waters film Polyester, which is by most considered a backwards approach. Those campy films were after a very long career of being a huge teen heartthrob. The world is a better place because he was in it and still feels the loss that he has left.

BEST KNOWN FOR: DescriptionTab Hunter was an American actor, singer, film producer and author. He appeared in over 40 films and was a well-known Hollywood star and heartthrob of the 1950s and 1960s, known for his blond, clean-cut good looks

Hunter was born in Manhattan, New York City, the son of Gertrude and Charles Kelm. His father was Jewish and his mother was a German Catholic immigrant, from Hamburg. He had an older brother, Walter. Hunter’s father was reportedly abusive, and within a few years of his birth, his parents divorced. He was raised in California living with his mother, brother, and maternal grandparents, John Henry and Ida Gelien, living in San Francisco, Long Beach and Los Angeles. His mother reassumed her maiden surname, Gelien, and changed her sons’ surnames, as well. As a teenager, Arthur Gelien, as he was then known, was a figure skater, competing in both singles and pairs. Hunter was sent to Catholic school by his religious mother.

He joined the United States Coast Guard at age 15, lying about his age to enlist. While in the Coast Guard, he gained the nickname “Hollywood” for his penchant for watching movies rather than going to bars while on liberty. When his superiors discovered his true age, they discharged him. He met actor Dick Clayton socially; Clayton suggested that Hunter become an actor.

Clayton introduced Hunter to agent Henry Willson, who specialized in representing male stars such as Robert Wagner and Rock Hudson. It was Willson who named him “Tab Hunter”.

Hunter’s first film role was a minor part in a film noir, The Lawless (1950). He was friends with character actor Paul Guilfoyle, who suggested him to director Stuart Heisler, who was looking for an unknown to play the lead in Island of Desire (1952) opposite Linda Darnell. The film, essentially a two-hander between Hunter and Darnell, was a hit.

Hunter supported George Montgomery in Gun Belt (1953), a Western produced by Edward Small. Small used him again for a war film, The Steel Lady (1953) supporting Rod Cameron, and as the lead in an adventure tale, Return to Treasure Island (1954). He began acting on stage, appearing in a production of Our Town.

He was then offered, and accepted, a contract at Warner Bros.

One of Hunter’s first films for Warners was The Sea Chase (1955), supporting John Wayne and Lana Turner. It was a big hit, but Hunter’s part was relatively small. Rushes were seen by William A. Wellman, who cast Hunter to play the younger brother of Robert Mitchum in Track of the Cat (1955). It was a solid hit and Hunter began to get more notice.

His breakthrough role came when he was cast as the young Marine Danny in 1955’s World War II drama Battle Cry. His character has an affair with an older woman, but ends up marrying the girl next door. It was based on a bestseller by Leon Uris and became Warner Bros.’ largest grossing film of that year, cementing Hunter’s position as one of Hollywood’s top young romantic leads. He was in the third (Battle Cry) and tenth (The Sea Chase) most popular films of the year.

In September 1955, the tabloid magazine Confidential reported that Hunter had been arrested for disorderly conduct in 1950. The innuendo-laced article, and a second one focusing on Rory Calhoun’s prison record, were the result of a deal Henry Willson had brokered with the scandal rag in exchange for not revealing the sexual orientation of his more prominent client, Rock Hudson, to the public. The report had no negative effect on Hunter’s career. A few months later, he was named Most Promising New Personality in a nationwide poll sponsored by the Council of Motion Picture Organizations. In 1956, he received 62,000 valentines. Hunter, James Dean, and Natalie Wood were the last actors to be placed under an exclusive studio contract at Warner Bros. Warners decided to promote him to star status, teaming him with Natalie Wood in two films, a Western, The Burning Hills (1956), directed by Heisler, and The Girl He Left Behind (1956), a service comedy. These films also proved to be hits with audiences and Warners planned a third teaming of Hunter and Wood. Hunter rejected the third picture, thus ending Warners’ attempt to make Hunter and Wood the William Powell and Myrna Loy of the 1950s. Hunter was Warner Bros.’ most popular male star from 1955 until 1959.

Hunter received strong critical acclaim for a television performance he gave in the debut episode of Playhouse 90 (“Forbidden Area”, 1956) written by Rod Serling and directed by John Frankenheimer.

Hunter had a 1957 hit record with the song “Young Love,” which was No. 1 on the Billboard Hot 100 chart for six weeks (seven weeks on the UK Chart) and became one of the larger hits of the Rock ‘n’ Roll era. It sold over one million copies, and was awarded a gold disc by the RIAA.

He had another hit single, “Ninety-Nine Ways”, which peaked at No. 11 in the United States and No. 5 in the United Kingdom. His success prompted Jack L. Warner to enforce the actor’s contract with the Warner Bros. studio by banning Dot Records, the label for which Hunter had recorded the single (and which was owned by rival Paramount Pictures), from releasing a follow-up album he had recorded for them. He established Warner Bros. Records specifically for Hunter.

Hunter’s acting career was also at its peak. William Wellman used him again in a war film, Lafayette Escadrille (1958). Columbia Pictures borrowed him for a Western, Gunman’s Walk (1958), a film which Hunter considered his favorite role.

Hunter starred in the musical film Damn Yankees (1958), in which he played Joe Hardy of Washington, D.C.’s American League baseball club. The film had originally been a Broadway musical, but Hunter was the only one in the film version who had not appeared in the original cast. The show was based on the best-selling 1954-book The Year the Yankees Lost the Pennant by Douglass Wallop. Hunter later said the filming was hellish because director George Abbott was only interested in recreating the stage version word for word. He starred in the films, They Came to Cordura with Gary Cooper and Rita Hayworth and That Kind of Woman (both 1959), with Sophia Loren.

Hunter’s failure to win the role of Tony in the film adaptation of West Side Story (1961) prompted him to agree to star in a weekly television sitcom. The Tab Hunter Show had moderate ratings (due to being scheduled opposite The Ed Sullivan Show) and lasted for only one season of 36 episodes. It was a hit in the United Kingdom, where it ranked as one of the most watched situation comedies of the year.

Hunter had a starring role as Debbie Reynolds’s love interest in The Pleasure of His Company (1961). He played the lead in a swashbuckler shot in Italy, The Golden Arrow (1962) and was in a war movie for American International Pictures, Operation Bikini (1963).

In 1964, he starred on Broadway opposite Tallulah Bankhead in Tennessee Williams’ The Milk Train Doesn’t Stop Here Anymore.

For a short time in the late 1960s, after several seasons of starring in summer stock and dinner theater in shows such as Bye Bye Birdie, The Tender Trap, Under the Yum Yum Tree, and West Side Story with some of the New York cast, Hunter settled in the south of France, where he acted in Spaghetti Westerns, including Vengeance Is My Forgiveness (1968), The Last Chance (1968), and Bridge over the Elbe (1969).

Hunter had the lead role in Sweet Kill (1973), the first movie from director Curtis Hanson. He won a co-starring role in the successful film The Life and Times of Judge Roy Bean (1972) with Paul Newman. He had small roles in Won Ton Ton, the Dog Who Saved Hollywood (1976), and Katie: Portrait of a Centerfold (1978).

Hunter’s career was revived in the 1980s, when he starred opposite actor Divine in John Waters’ Polyester (1981) and Paul Bartel’s Lust in the Dust (1985). He played Mr. Stuart, the substitute teacher in Grease 2 (1982), who sang “Reproduction”. Hunter had a major role in the 1988 horror film Cameron’s Closet.

Hunter wrote the story for, and starred in, Dark Horse (1992), his last film.

An award-winning 2015 documentary about his life, Tab Hunter Confidential, was directed by Jeffrey Schwarz and produced by Hunter’s husband Allan Glaser. As of June 2018, a feature film about Hunter was in development at Paramount Pictures to be produced by Glaser, J. J. Abrams and Zachary Quinto. Pulitzer Prize- and Tony Award-winning writer Doug Wright is attached to create the screenplay.

Hunter’s autobiography, Tab Hunter Confidential: The Making of a Movie Star (2005, co-written with Eddie Muller), became a New York Times bestseller, as did the paperback edition in 2007. The book was nominated for several awards. It re-entered The New York Times’ bestseller list for a third time on June 28, 2015, upon the release of a documentary film based on the book.

In the book, Hunter acknowledged that he was gay, confirming rumors in circulation since the height of his fame. According to William L. Hamilton of The New York Times, detailed reports about Hunter’s alleged romances with close friends Debbie Reynolds and Natalie Wood during his young adult years had strictly been the fodder of studio publicity departments. As Wood and Hunter embarked on a well-publicized but fictitious romance, insiders had developed their own headline for the item: “Natalie Wood and Tab Wouldn’t”.

Regarding Hollywood’s studio era, Hunter said, “was difficult for me, because I was living two lives at that time. A private life of my own, which I never discussed, never talked about to anyone. And then my Hollywood life, which was just trying to learn my craft and succeed …” The star emphasized that the word “‘gay’ … wasn’t even around in those days, and if anyone ever confronted me with it, I’d just kinda freak out. I was in total denial. I was just not comfortable in that Hollywood scene, other than the work process.” “There was a lot written about my sexuality, and the press was pretty darn cruel,” the actor said, but what “moviegoers wanted to hold in their hearts were the boy-next-door marines, cowboys and swoon-bait sweethearts I portrayed.”

Hunter had long-term relationships with actor Anthony Perkins and champion figure skater Ronnie Robertson before settling down and marrying his partner/spouse of over 35 years, film producer Allan Glaser.

Hunter has a star for his contributions to the music industry on the Hollywood Walk of Fame at 6320 Hollywood Blvd. In 2007, the Palm Springs Walk of Stars dedicated a Golden Palm Star to him.

Three days before his 87th birthday, Hunter died after suffering cardiac arrest which arose from complications related to deep vein thrombosis. According to Glaser, Hunter’s death was “sudden and unexpected”.

Author of books:
Tab Hunter Confidential: The Making of a Movie Star (2005, memoir)