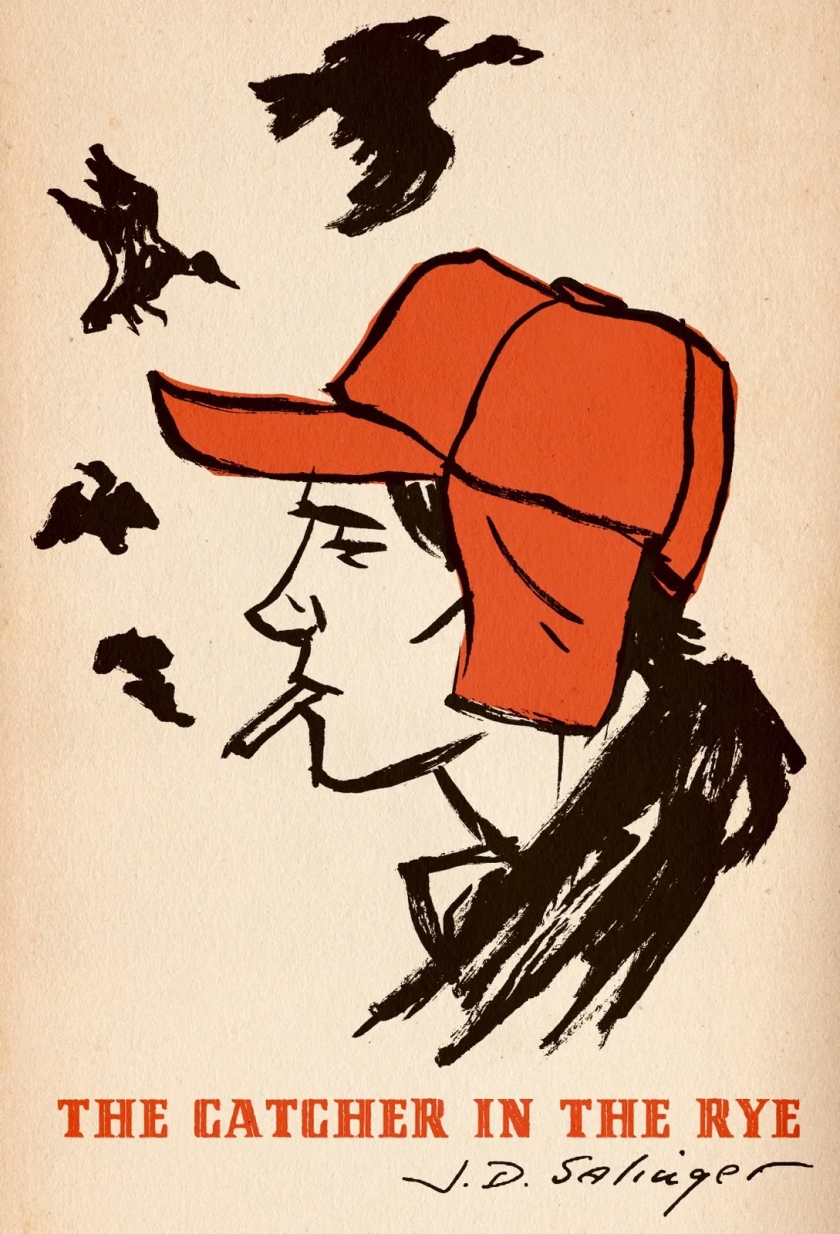 Seventy-one years ago today, the novel The Catcher in the Rye was published. Originally, it has been partially serialized five years earlier and intended for adults, it is often read by adolescents for it’s themes of angst, alienation, and critique of superficiality in society. The novel’s protagonist Holden Caulfield has become an icon for teenage rebellion.

Holden Caulfield, a depressed 17-year-old, lives in a sanitorium in California after the end of World War II. After his discharge within a month, he intends to go live with his brother D.B., an author and war veteran with whom Holden is angry for becoming a Hollywood screenwriter.

Holden recalls the events of a single night during the previous Christmas, beginning at Pencey Preparatory Academy, a boarding school in Pennsylvania. Holden has just been expelled from Pencey because he had failed all of his classes except English. After forfeiting a fencing match in New York because he accidentally lost his equipment on the subway, he says goodbye to his history teacher, Mr. Spencer, who is a well-meaning but long-winded old man. Spencer offers him advice and simultaneously embarrasses Holden by criticizing his history exam.

Back at his dorm, Holden’s dorm neighbor, Robert Ackley, who is unpopular among his peers, disturbs Holden with his impolite questioning and mannerisms. Holden, who feels sorry for Ackley, tolerates his presence. Later, Holden agrees to write an English composition for his roommate, Ward Stradlater, who is leaving for a date. Holden and Stradlater normally hang out well together, and Holden admires Stradlater’s physique. He is distressed to learn that Stradlater’s date is Jane Gallagher, with whom Holden was infatuated, and whom he feels the need to protect. That night, Holden decides to go to a Cary Grant comedy with Mal Brossard and Ackley. Since Ackley and Mal had already seen the film, they end up just eating food and playing pinball for a while and returning to Pencey. When Stradlater returns hours later, he fails to appreciate the deeply personal composition Holden wrote for him about the baseball glove of Holden’s late brother Allie who died from leukemia a few years prior, and refuses to say whether he had sex with Jane. Enraged, Holden punches him, and Stradlater easily wins the fight. When Holden continues insulting him, Stradlater leaves him lying on the floor with a bloody nose. Fed up with the “phonies” at Pencey Prep, Holden decides to leave Pencey early and catches a train to New York. Holden intends to stay away from his home until Wednesday when his parents would have received notification of his expulsion. Aboard the train, Holden meets the mother of a wealthy, obnoxious Pencey student, Ernest Morrow, and makes up nice but false stories about her son.

In a taxicab, Holden asks the driver whether the ducks in the Central Park lagoon migrate during winter, a subject he brings up often, but the man barely responds. Holden checks into the Edmont Hotel and spends an evening dancing with three tourists at the hotel lounge. Holden is disappointed that they are unable to hold a conversation. Following an unpromising visit to a nightclub, Holden becomes preoccupied with his internal angst and agrees to have a prostitute named Sunny visit his room. His attitude toward the girl changes when she enters the room and takes off her clothes. Holden, who is a virgin, says he only wants to talk, which annoys her and causes her to leave. Even though he maintains that he paid her the right amount for her time, she returns with her pimp Maurice and demands more money. Holden insults Maurice, Sunny takes money from Holden’s wallet, and Maurice snaps his fingers on Holden’s groin and punches him in the stomach. Afterward, Holden imagines that he has been shot by Maurice and pictures murdering him with an automatic pistol.

The next morning, Holden, becoming increasingly depressed and in need of personal connection, calls Sally Hayes, a familiar date. Although Holden claims that she is “the queen of all phonies,” they agree to meet that afternoon to attend a play at the Biltmore Theater. Holden shops for a special record, “Little Shirley Beans”, for his 10-year-old sister Phoebe. He spots a small boy singing “If a body catch a body coming through the rye”, which lifts his mood. After the play, Holden and Sally go ice skating at Rockefeller Center, where Holden suddenly begins ranting against society and frightens Sally. He impulsively invites Sally to run away with him that night to live in the wilderness of New England, but she is uninterested in his hastily conceived plan and declines. The conversation turns sour, and the two angrily part ways.

Holden decides to meet his old classmate, Carl Luce, for drinks at the Wicker Bar. Holden annoys Carl, whom Holden suspects of being gay, by insistently questioning him about his sex life. Before leaving, Luce says that Holden should go see a psychiatrist, to better understand himself. After Luce leaves, Holden gets drunk, awkwardly flirts with several adults, and calls an icy Sally. Exhausted and out of money, Holden wanders over to Central Park to investigate the ducks, accidentally breaking Phoebe’s record on the way. Nostalgic, he heads home to see his sister Phoebe. He sneaks into his parents’ apartment while they are out, and wakes up Phoebe — the only person with whom he seems to be able to communicate his true feelings. Although Phoebe is happy to see Holden, she quickly deduces that he has been expelled, and chastises him for his aimlessness and his apparent disdain for everything. When asked if he cares about anything, Holden shares a selfless fantasy he has been thinking about (based on a mishearing of Robert Burns’s Comin’ Through the Rye), in which he imagines himself as making a job of saving children running through a field of rye by catching them before they fell off a nearby cliff (a “catcher in the rye”). Phoebe points out that the actual poem says “when a body meet a body, comin through the rye.” Holden breaks down in tears, and his sister tries to console him.

When his parents return home, Holden slips out and visits his former and much-admired English teacher, Mr. Antolini, who expresses concern that Holden is headed for “a terrible fall”. Mr. Antolini advises him to begin applying himself and provides Holden with a place to sleep. Holden is upset when he wakes up to find Mr. Antolini patting his head, which he interprets as a sexual advance. He leaves and spends the rest of the night in a waiting room at Grand Central Terminal, where he sinks further into despair and expresses regret over leaving Mr. Antolini. He spends most of the morning wandering Fifth Avenue.

Losing hope of finding belonging or companionship in the city, Holden impulsively decides that he will head out West and live a reclusive lifestyle as a deaf mute gas station attendant living in a log cabin. He decides to see Phoebe at lunchtime to explain his plan and say goodbye. While visiting Phoebe’s school, Holden sees graffiti containing a curse word and becomes distressed by the thought of children learning the word’s meaning and tarnishing their innocence. When he meets Phoebe at the Metropolitan Museum of Art, she arrives with a suitcase and asks to go with him, even though she was looking forward to acting as Benedict Arnold in a play that Friday. Holden refuses to let her come with him, which upsets Phoebe. He tries to cheer her up by allowing her to skip school and taking her to the Central Park Zoo, but she remains angry. They eventually reach the zoo’s carousel, where Phoebe reconciles with Holden after he buys her a ticket. Holden is finally filled with happiness and joy at the sight of Phoebe riding the carousel.

Holden finally alludes to encountering his parents that night and “getting sick”, mentioning that he will be attending another school in September. Holden says that he doesn’t want to tell anything more because talking about them has made him find himself missing his former classmates.