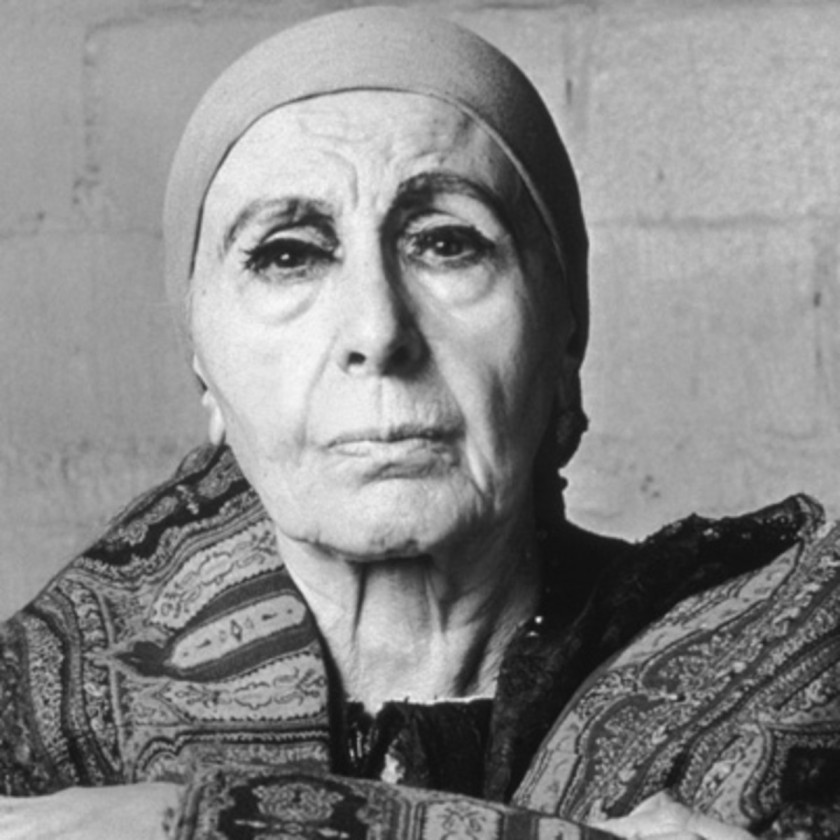 Today is the 123rd birthday of the sculptor Louise Nevelson. He works are so intricate, so mechanical, I am attracted to the uniformity, the monochromatic color, and the scale. That entire sculpture is painted black. The world is a better place because she was in it and still feels the loss that she has left.

BEST KNOWN FOR: Louise Nevelson was an iconoclast artist known for her monochromatic abstract expressionist sculptures. She rose to be an internationally known artist and worked into her 80s.

Louise Nevelson was born Leah Berliawsky in Kiev, Russia, on September 23, 1899. Her parents, mother Mina Sadie and father Isaac Berliawsky, had a comfortable lifestyle due to Isaac’s successful lumber business. However, the family experienced harsh discrimination for being Jewish in Tsarist Russia. In 1902, Isaac traveled to the United States to start a new life for his family. Young Leah was so traumatized with her father’s absence wouldn’t speak for six months.

By 1905, Isaac Berliawsky had settled in Rockland, Maine, and after finding employment, sent for the family. They initially struggled financially, but in time Isaac built a successful lumber and real estate business. While the Berliawskys enjoyed a beautiful home and comfortable lifestyle, their progressive views (her father advocated for women’s rights and her mother was a freethinker) made them stand out in the small town. The scrutiny made the family feel isolated.

By her own account, young Leah knew that she wanted to be an artist at an early age. She became disgruntled living in a small town and planned to get away. After graduating from high school, she set out to gain her independence. In 1920, she changed her name to Louise and married Charles Nevelson, a man from a wealthy ship-owning family. In 1922, she gave birth to her only child, Myron (Mike), who later became a sculptor. Louise soon bristled at the expectations of an upper-middle class lifestyle, and after 11 years of ever-increasing discontent, she took her son to live with her parents in Maine and separated from her husband.

In 1932, Nevelson traveled to Germany to study Cubism with Hans Hofmann, until the Nazis closed the school. She followed Hofmann to New York and enrolled at the Art Students League, an art school where Jackson Pollock and other Abstract Expressionists studied. She worked in various media—painting, sculpture and printing—often exemplifying an established modernist style. Early in the 1930s, Nevelson was a “starving artist,” living simply and for her art. She survived by selling some artwork and, in time, her reputation as a sculptor grew.

In the 1940s, Nevelson experimented with different styles and materials such as wood and junk that she found in the streets of New York. She began working with monochrome paint, particularly black, and assembled the sculpture pieces in groupings. Nevelson created works that illustrated how freedom of expression was a political act. While making a reputation with her art, she cultivated an extravagant personal lifestyle that included glamorous gowns, heavy face makeup and unconventional hairstyles.

Nevelson’s real success came in the late 1950s, when some of her works were featured at the Museum of Modern Art. Gradually, other big museums and collectors recognized her talent, and she rose through the ranks of the New York art world. But it wasn’t until she was well into her 60s that she could depend on a steady income from her work. Nevelson developed several large installations throughout the 1970s and ’80s, including large traveling exhibitions across the United States and several foreign countries, and commissions at Princeton University, Federal Court House in Philadelphia and the Massachusetts Institute of Technology. In 1979, she made her most visible imprint on New York: The Louise Nevelson Plaza in lower Manhattan.

Throughout the rest of her life, Nevelson lived simply, having little desire for material possessions. She worked into her 80s, never deterring from a challenge. She had finished a 35-foot black sculpture installed at the National Institutes of Health in Bethesda, Maryland, just before she died of natural causes, on April 17, 1988, in New York City.

Nevelson’s work stands out as a foundational contribution to feminist art challenging the stereotypical “male” sculptor style. She is admired for designing exhibitions with pieces that not only as individual objects, but as parts of a whole. Nevelson, not intimidated by new ideas or creativity, was an outstanding sculptor who redefined femininity in sculpture art.