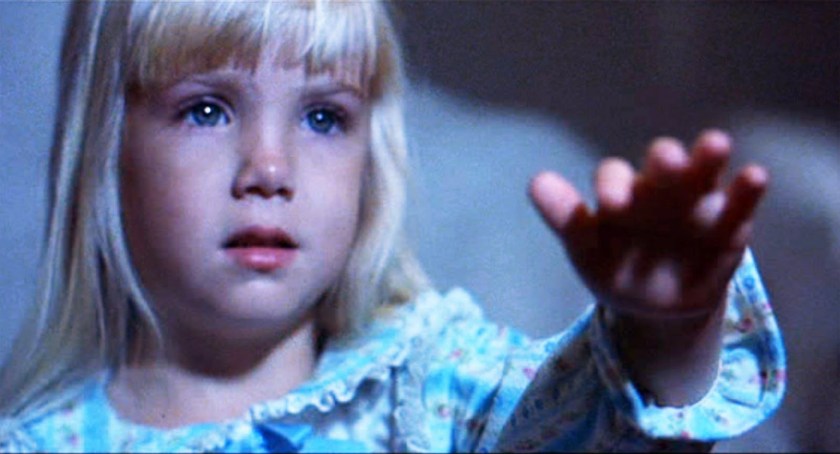 Today is the 47th birthday of the little girl from the film Poltergeist, Heather O’Rourke. She died when she was only 12 years old, adding fuel to the Poltergeist Curse theories. The world is a better place because she was in it and still feels the loss that she has left.

BEST KNOWN FOR: American child actress. She made her debut after being discovered by director Steven Spielberg while visiting MGM’s studios. Spielberg promptly casted her in the horror film Poltergeist (1982) as Carol Anne Freeling, and was recognized for her performance.

Heather O’Rourke was born on December 27, 1975, in San Diego, California, to Kathleen and Michael O’Rourke. Her mother worked as a seamstress and her father was a carpenter. She had an older sister, Tammy O’Rourke, also an actress. Her parents divorced in 1981, and O’Rourke’s mother married part-time truck driver Jim Peele in 1984, while they were living in a trailer park in Anaheim, California.

Her success later allowed the family to purchase a home in Big Bear Lake, California. Between acting jobs, O’Rourke attended Big Bear Elementary School where she was president of her 5th grade class. At the time of her death, the family was living in Lakeside, California, a suburb of San Diego.

In a contemporary interview with American Premiere magazine, producer Steven Spielberg explained that he was looking for a “beatific four-year-old child…every mother’s dream” for the lead in his horror film Poltergeist (1982). While eating in the MGM commissary, Spielberg saw five-year-old Heather O’Rourke having lunch with her mother while older sister Tammy was shooting Pennies from Heaven. After his lunch, Spielberg approached the family and offered O’Rourke the Poltergeist role; she was signed the next day, beating Drew Barrymore, who was also up for the role.

In the Poltergeist trilogy, O’Rourke played Carol Anne Freeling, a young suburban girl who becomes the conduit and target for supernatural entities. The New York Times noted that she had played the key role in the films and commented, “With her wide eyes, long blonde hair and soft voice, she was so striking that the sequel played off her presence.” During the production of the original Poltergeist, Spielberg twice accommodated the child actress when frightened. When scared by performing a particular stunt, Spielberg replaced O’Rourke with a stunt double wearing a blonde wig; and when disturbed by the portrayal of child abuse, Spielberg did not require her to perform the take again. For her work in Poltergeist, O’Rourke earned between $35,000 and $100,000. O’Rourke played the role in all three films.

O’Rourke’s delivery of the lines “They’re here!” in the first film, and “They’re baa-aack!” in the second (that film’s tagline), placed her in the collective pop culture consciousness of the United States. “They’re here!” is #69 on the American Film Institute’s list of 100 Movie Quotes.

After her work in Poltergeist (1982), O’Rourke secured several television and TV movie roles. In April 1983, she starred as herself alongside Morey Amsterdam and well-known Walt Disney animated characters in the hour-long television special, Believe You Can…and You Can! She also appeared in CHiPs, Webster, The New Leave It to Beaver, Our House, and had a recurring role on Happy Days as Heather Pfister. She also appeared in the television movies Massarati and the Brain and Surviving: A Family in Crisis.

O’Rourke became ill with giardiasis in early 1987 and was later diagnosed as having Crohn’s disease. She was prescribed a steroid to treat the disease during the time she was filming Poltergeist III. On January 31, 1988, she began vomiting. The next morning she collapsed; she suffered cardiac arrest en route to the hospital and died later that day after surgery to repair an acute bowel obstruction caused by congenital stenosis of the intestine complicated by septic shock. She was entombed at Westwood Village Memorial Park Cemetery.