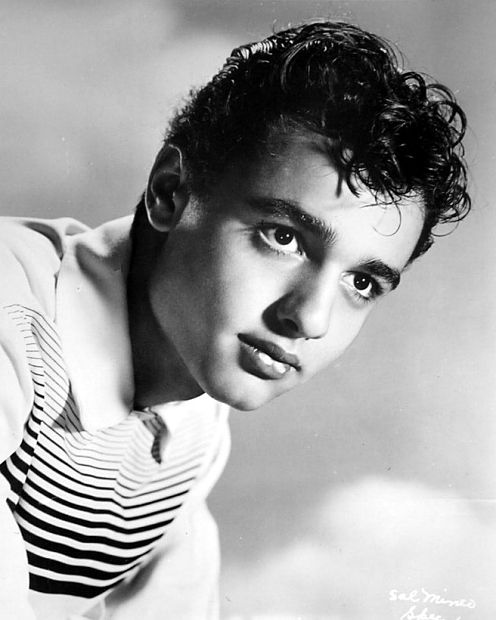 Today is the 84th birthday of the 50’s actor Sal Mineo.  He is probably best known for his role opposite James Dean in Rebel Without a Cause.  I first learned of him was from a rerun of Mysteries and Scandals.  His story is one of those Hollywood heart-breakers that you hear about:  plucked from obscurity, fame, untimely death.  The world is a better place that Sal was in it and still feels the loss that he left it.

BEST KNOWN FOR: Sal Mineo was an American was best known for playing a key role in the classic teen film Rebel Without a Cause alongside James Dean.

Actor Sal Mineo was born Salvatore Mineo, Jr., on January 10, 1939, in the Bronx, New York. As a wayward youth, Mineo found his way to acting only as a means of avoiding juvenile confinement. He made his debut on Broadway in 1951 in Tennessee Williams’ The Rose Tattoo followed by a substantial role in The King and I.

Mineo appeared in a few films before landing the most memorable role of his career, that of Plato in the classic Rebel Without a Cause. Mineo received an Academy Award nomination for his performance opposite James Dean.

The nomination shot Mineo into superstardom, and he continued to work steadily through the 1950s in such films as Somebody Up There Likes Me and Exodus, the latter earning the young actor his second Oscar nod. However, by the mid 1960s, Mineo’s film career had slowed considerably, and he began to take parts on television and to direct stage plays.

On February 12, 1976, the down-and-out Mineo met an untimely death. The actor was brutally murdered in Hollywood by a pizza delivery boy at the age of 37.