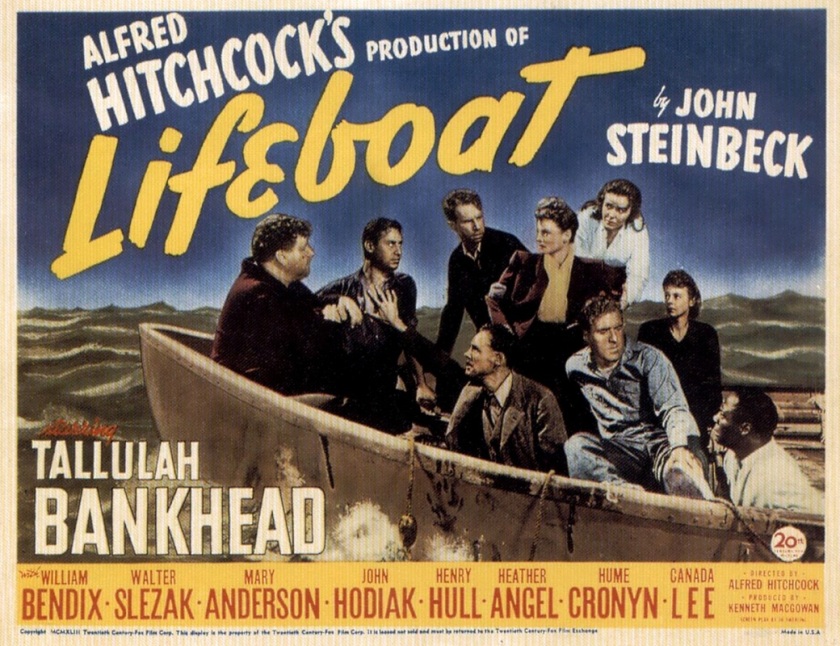 Eighty years ago, the film Lifeboat premiered. Alfred Hitchcock and Tallulah Bankhead of course makes this film pure genius, also that the entire film takes place on a lifeboat so all the drama and suspense must be created through dialogue and dialogue alone. Also, not until researching this did I learn that the film was based off of a story by John Steinbeck. You have to see this film.

Several British and American civilians, service members and merchant mariners are stuck in a lifeboat in the North Atlantic after their ship and a U-boat sink each other in combat. Willi, a German survivor, is pulled aboard and denies being the U-boat’s captain. During an animated debate, engine room crewman Kovac demands the German be thrown out to drown. However, the others object, with radioman Stanley, wealthy industrialist Rittenhouse and columnist Connie Porter, who speaks German, succeeding in arguing that he be allowed to stay. Porter, initially alone in the boat, had managed to bring her luggage with her, and her primary concern at first is a run in her stocking. She is thrilled at having filmed the battle between the two vessels, but her movie camera is the first in a series of her possessions to be lost overboard in a succession of incidents.

Among the passengers is Mrs. Higley, a young British woman whose infant child is dead when they are pulled from the water after being saved by steward “Joe” Spencer. After being treated by a U.S. Army nurse, Alice, she must be tied down to stop her from hurting herself. The woman, still wrapped in Porter’s mink coat for warmth, sneaks off the boat while the other passengers sleep, drowning herself in the night. Willi is revealed to be the U-boat captain.

The film then follows the lifeboat inhabitants as they attempt to organize their rations, set a course for Bermuda, and coexist as they try to survive. The passengers also cooperate through this stress, such as when they must amputate the leg of one of their boatmates, the German-American Gus Smith, because of gangrene.

Kovac takes charge, rationing the little food and water they have, but Willi, who has been consulting a concealed compass and reveals that he speaks English, wrests control away from him in a storm.

One morning, while the others are sleeping, Smith, who has been drinking seawater and is hallucinating, catches Willi drinking water from a hidden flask. Gus tries to tell Stanley but Stanley doesn’t believe him because Gus also tells him he just had an ice-cold one with Rosie. Willi tries to coax Gus overboard, telling him that Rosie is waiting, but Gus keeps talking about the water, and, afraid someone will hear, Willi pushes him over the side. Gus’ calls for help rouse Stanley and the others, but it is too late.

Alice wishes she could cry for Gus, but tears are made of water. When they realize that Willi is sweating, Stanley remembers what Gus told him. Joe pulls the flask from Willi’s shirt, but it breaks when Willi grabs at it. Willi explains that like everyone on a U-boat he had food tablets and energy pills. To survive, one must have a plan.

In a spasm of anger led by Alice, they descend upon him as a group, all but Joe, who tries to pull Alice back. Stanley grabs a piece of board and hits him repeatedly; the others use their fists to beat him and force him overboard. He clings to the side, out of camera, and while the others feebly pummel him, Rittenhouse grabs Gus’ boot and delivers two sweeping and, by the sound, skull-crushing blows.

Later on, as they drift, Rittenhouse says that he will never understand Willi’s ingratitude. “What do you do with people like that?” No one answers. Stanley proposes to Alice, and she accepts, although they have little hope of surviving.

Connie chastises everyone for giving up and pauses in her tirade on the exclamation “ye gods and little fishes!” Inspired, she offers her bracelet as bait. A fish strikes, but Joe sights a ship, and in the rush for the oars the line goes overboard and the bracelet is lost.

It is the German supply ship to which Willi had been steering them. But before a launch can pick them up, both it and the supply ship are sunk by gunfire from an Allied warship over the horizon.

Kovac estimates that the Allied vessel will be there in 20 minutes. Connie panics over the state of her hair, nails and face. Joe hopes his wife isn’t worried. Rittenhouse admires a picture of Joe’s family—and still persists in calling him “George”. Rittenhouse promises to honor his poker debt to Kovac: $50,000 ($726,000 today). Connie tells Kovac he is going to take it because he owes her a bracelet, a typewriter and a camera. He smiles and says “Yes ma’am.”

A frightened, wounded, young German seaman is pulled aboard the lifeboat. Rittenhouse is now all for killing him, and the others, including Kovac, have to hold him back. The German sailor pulls a gun but is disarmed by Joe. The seaman asks in German, “Aren’t you going to kill me?” Kovac muses, “‘Aren’t you going to kill me?’ What are you going to do with people like that?” Stanley says “I don’t know, I was thinking of Mrs. Higley and her baby, and Gus.” “Well,” Connie says, “maybe they can answer that .”